A video has been viewed tens of thousands of times in multiple posts on Facebook and Twitter alongside a claim that it shows a group of Hindu nationalists celebrating England’s victory in the 2019 Cricket World Cup. The claim is false; the video has circulated online since December 2015 in media reports about members of the Rashtriya Swayamsevak Sangh (RSS) celebrating after completing their education training. 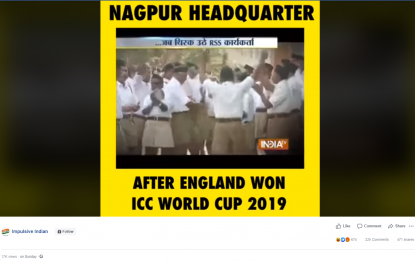 A journalist in AFP's Delhi bureau analysed the video. In the clip, a narrator can be heard saying in Hindi: “It is highly unlikely that you have seen RSS activists like this. These Swayamsevaks are dancing in their khaki shorts and white shirts, with black caps on their heads.

“It is interesting to see the majority of these activists are either middle-aged or elderly. This video is shot from the RSS headquarters in Nagpur."

The RSS, or Rashtriya Swayamsevak Sangh, is a Hindu nationalist organisation headquartered in Nagpur; here is a report on the group by Indian news magazine India Today.

The same video has been viewed tens of thousands of times alongside a similar claim elsewhere on social media, such as here on Facebook and here on Twitter.

The claim is false; the video has circulated since December 2015 in media reports about members of the Rashtriya Swayamsevak Sangh (RSS) celebrating after completing their education training.

A logo for Hindi news channel India TV can be seen in the bottom right-hand corner of the video in the misleading post.

AFP found the same clip beginning at the 19 second mark of this YouTube video uploaded by India TV on December 17, 2015:

The clip, entitled “RSS Activist Seen Dancing Before Meeting in Nagpur”, is accompanied by the same Hindi-language narration as heard in the video in the misleading post.

A Google keyword search of “RSS activists dance” found the same clip beginning at the five second mark of this video published by Hindi news channel Aaj Tak on December 16, 2015.

Below is a screenshot comparison of the video in the misleading post (L) and the versions published by India TV (C) and Aaj Tak (R):

Aaj Tak published this report alongside screenshots of the video on December 17, 2015.

Part of the report translates to English as: “The Rashtriya Swayamsevak Sangh (RSS) is known for its discipline, but some members were seen dancing in Nagpur after completing the third and final year of their education training.”