A video has been viewed tens of thousands of times in multiple posts on Facebook and YouTube alongside a claim it shows a fight at a resort in Singapore. The claim is false; the video actually shows a group of people fighting at a hotel in Florida.

The one-minute 44-second video shows a clash between a group of people. Text superimposed on the video says: “@MBS”. 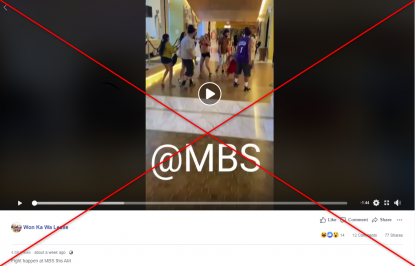 The post’s caption states: “Fight happen at MBS this AM”.

The same video was also shared alongside a similar claim on Facebook here, where it has been viewed more than 45,000 times, and on YouTube here.

A Google reverse image search of the keyframes of the video using video verification tool InVID-WeVerify, followed by a keyword search, found an identical video posted on Twitter here on July 25, 2020. The caption states: “They fighting in hardrock”.

They fighting in hardrock 😭😭😭😭 pic.twitter.com/emS4clMuiA

Below is a screenshot comparison of the video in the misleading post (L) and the earlier Twitter video (R):

The same user also uploaded the second video of the fight here.

The report reads in part: “The minutes-long brawl, recorded on a bystander’s cellphone camera, has drawn more than 4.5 million views on Twitter. The large fight broke out Friday at Seminole Hard Rock Hotel & Casino Hollywood, spilling from the entrance of a restaurant to the next.

“About 10 to 15 men and women were involved, but police reviewed surveillance video and ultimately arrested three people for the fight. All the fighters have been banned from the Hard Rock.”

Seminole Hard Rock Hotel & Casino Hollywood, also known as "the Guitar Hotel”, is a hotel and casino resort near the city of Hollywood in Florida.

The interior seen at the 42-second mark in the misleading video matches the corridor shown at the two-minute 52-second mark in this video titled “A Quick Lobby Tour & Elevator Ride at the Seminole Hard Rock Hotel & Casino in Hollywood, FL”.

The interior seen at the one-minute nine-second mark in the misleading video matches the entrance to the Guitar Tower seen at the 18-minute 39-second mark of this video, which is titled: “GUITAR HOTEL Grand Opening Celebration at Seminole HARD ROCK Hotel & Casino in Hollywood, Florida.”

Below is a screenshot comparison of the misleading video (L) and the two YouTube videos (R):