This video shows a failed robbery attempt in Indonesia

A video that has been viewed thousands of times on Facebook alongside a claim that it shows an unsuccessful robbery attempt in Penang, a state in Malaysia. The claim is false; the video shows a failed robbery attempt in Indonesia.

The video was published on Facebook here on December 19, 2020. It has since been shared more than 1,200 times.

The one-minute, 39-second video shows a person wearing a bicycle helmet walking along an open ditch being pelted with stones and struck by a long stick before eventually falling down.

The post’s simplified Chinese caption reads: “It happened in Penang, he fell into a ditch after an unsuccessful robbery and was attacked by people”. 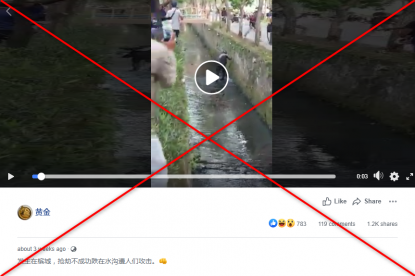 The video was also shared more than 10,000 times alongside similar claims on Facebook here, here and here.

A reverse image search with video keyframes following by a keyword search on Google found that the video was published here on the Facebook page of Indonesian news site Jurnal Pantura on December 19, 2020. 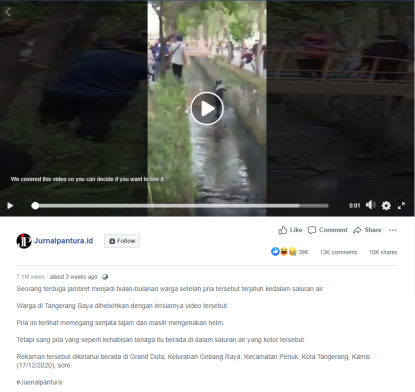 The video’s Indonesian-language caption partly reads: “A suspected robber became a target of the residents’ wrath after he fell into a waterway”.

Periuk is a district in Tangerang, a city in the Indonesian province of Banten.

The incident was also reported by other Indonesian media, such as Detik.com and Suara.com. Both news sites shared the same video and screenshots of the clip.

Indonesian police also released a statement here on December 20, 2020, saying that the incident happened at a residential neighborhood in Periuk and that the suspect, who tried to rob a woman, was later handed over to police.

Below is a screenshot comparison of the video from the misleading post (L) and the video posted by Jurnal Pantura (R):