This video shows an eruption of Indonesia’s Mount Sinabung

Footage of a volcano eruption has been viewed thousands of times in multiple posts on Facebook and Twitter alongside a claim it shows the eruption of Mount Semeru on the Indonesian island of Java in 2020. The claim, however, is false; this video has circulated online since at least 2014 and shows an eruption of Mount Sinabung, a volcano in Sumatra.

The Indonesian-language post translates to English as: “Mount Semeru erupted on Sunday (11/29/2020). May the universe be peaceful.” 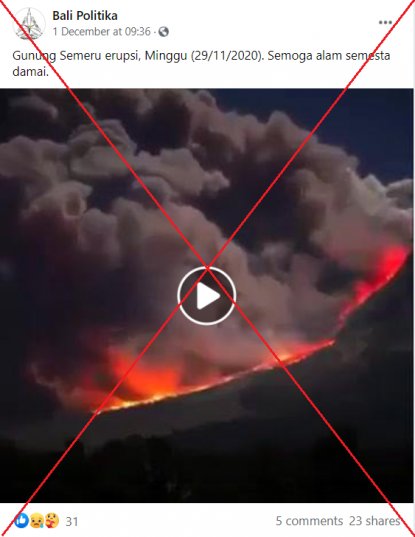 The same footage has been viewed more than 15,000 times after being shared on Facebook alongside a similar claim here, here, here and here; as well as on Twitter here and here.

A combined reverse Google image and keyword search found a longer version of the video posted here on January 21, 2014, on the YouTube channel of Photovolcanica.

The channel describes itself as a provider of “videos of volcanoes and geothermal features from around the world”.

The title of the 51-second video reads: “Pyroclastic flows and close up of collapsing lava lobe at night, Sinabung Volcano, Indonesia”.

The caption's states, in part: “Animation (Timelapse) shows pyroclastic flow at Mount Sinabung, Sumatra. Further, a close-up of the lava lobe is shown including the collapse of the lobe front leading to a pyroclastic flow. Movement of the lobe prior to collapse is just about visible.”

Below is screenshot comparison of the footage in the misleading post (L) and the YouTube video (R): 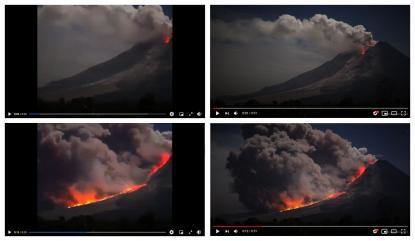 More than 25,000 people had to evacuate their homes following multiple eruptions of Mount Sinabung in January 2014, the National Disaster Mitigation Agency (BNPB) said on January 11, 2014.

AFP also captured the lava flow during the eruption of Mount Sinabung in January 2014 in photos published here and here.