A video has been viewed thousands of times in multiple posts on Facebook and YouTube alongside a claim that it shows Chinese citizens converting to Islam as a result of the novel coronavirus pandemic. The claim is false; the footage actually shows an Eid-al-Fitr prayer in the Chinese city of Xining in 2015, years before the pandemic.

This five-minute 54-second video shows an aerial view of a mass congregation. It was published on YouTube on March 20, 2020.

The video’s Indonesian-language title translates to English as: “Chinese citizens flocked to convert to Islam due to corona”. The same footage, which has been watched more than 13,000 times, was also shared on Facebook here, here, here and here, alongside a similar claim.

The claim is false; the video actually shows an Eid-al-Fitr prayer in the Chinese city of Xining in 2015.

A reverse image search on Google followed by a keyword search found a longer, higher-quality version of the video published here on Baidu Video, a Chinese video platform.

Eid-al-Fitr marks the end of Ramadan, the Muslim holy month of fasting, which is celebrated by performing communal prayer as well as visiting family and friends.

Dongguan Mosque, one of the largest mosques in northwest China, is located in Xining, Qinghai province.

Below are two screenshot comparisons of scenes in the video in the misleading post (L) and the Baidu Video clip (R): 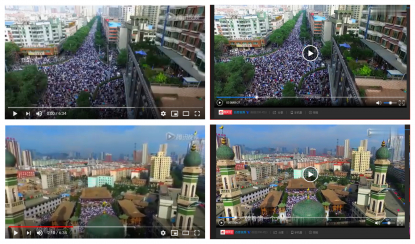 The logo for Tencent, a Chinese online video platform, can be seen in the right-hand corner of both clips.

The video has been removed from Tencent, but the Tencent link appears in this Weibo post, dated March 3, 2016, with the same video title: “Spectacular SD aerial video / Eid al-Fitr at Xining Dongguan Mosque”.

Chinese portal Sina.com also published this report dated July 18, 2015, about Eid-al-Fitr celebrations across China, which fell one day earlier in some parts of the country, including Qinghai.

Images of Dongguan Mosque, seen on Google Street View below, correspond with the video.