A video has been viewed tens of thousands of times in multiple Facebook and Twitter posts alongside a claim that it shows a ghost at the Indonesian House of Representative building, where President Joko Widodo was sworn in on October 20, 2019. The claim is false; the video was created in 2016 by a Nicaraguan film company using computer-generated imagery (CGI). 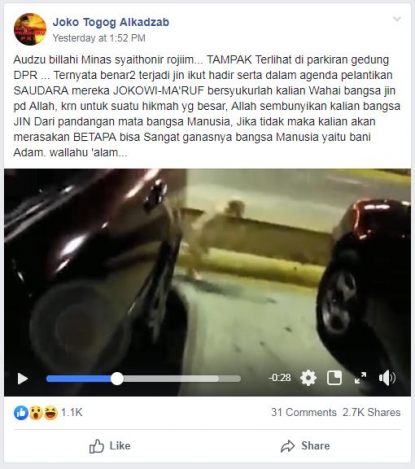 The post’s Indonesian-language caption translates to English as: “I take refuge in God from evil of the cursed… It was seen in the House of Representatives’ car park building … It really happened that spirits were also present during the inauguration of their brothers JOKOWI-MA'RUF. You should be grateful to God oh the nation of spirits because, for a great wisdom, God has made you spirits invisible from the vision of human being, if not you will feel how humans can become very cruel. God knows best...”

“Jokowi” is the nickname for President Joko Widodo, while “Ma’ruf” refers to Vice President Ma’ruf Amin.

The video was also shared on Facebook here, here and here; and on Twitter here, where it has been viewed more than 55,000 times and retweeted more than 500 times, with a similar claim.

The claim is false; the video was created in 2016 by a Nicaraguan company using computer-generated imagery (CGI).

Text superimposed on the video in the top right-hand corner in the misleading video reads: “JJPD Producciones.”

Keyword searches on Google using the text found this one-minute video that was published on the official YouTube channel of JJPD Producciones on May 23, 2016.

The video’s Spanish-language caption translates to English as: “JJPD Productions. Goblin in parking lot 2016 (Spanish version) CGI Video (computer generated imagery) If you liked the video, like and subscribe, :) Managua-Nicaragua-2016.”

According to the description on its YouTube channel and its Facebook page, JJPD Producciones is based in Nicaragua and specializes in special effects, animations and short films.