A video has been viewed tens of thousands of times in multiple posts on Facebook, Twitter and YouTube alongside a claim it shows a French policeman hitting a Muslim woman. The claim is false; the video has circulated in reports about a Canadian police officer assaulting a woman in custody in December 2017.

The 59-second video shows a CCTV recording of a policeman slamming a handcuffed woman to the floor. 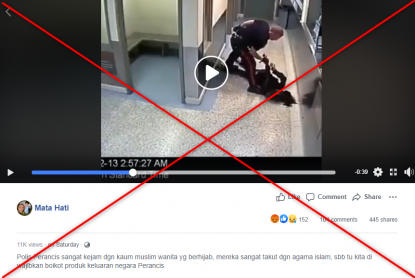 The Malaysian-language caption translates to English as: “French police are very cruel to Muslim women who wear hijab, they are very afraid of Islam, that’s why we are obliged to boycott products made in France”.

The claim circulated online after French President Emmanuel Macron criticised Islamists and vowed not to “give up cartoons” depicting Prophet Muhammad, sparking calls to boycott French products in the Islamic world.

The video was viewed more than 44,000 times after it appeared with a similar claim on Facebook here and here, on Twitter here, and YouTube here and here.

The video was also posted with a similar claim in Arabic here and here.

A reverse image search using keyframes extracted with digital verification tool InVID-WeVerify, followed by a keyword search, found a longer video of the incident was posted on October 28, 2020, on the YouTube channel of 660 News, a Canadian news station.

The video is titled: “FULL VIDEO: Const. Alex Dunn is seen slamming a woman to the ground”. The caption reads: “Dunn was charged with assault causing bodily harm in the Dec. 2017 event. His trial is underway in Calgary. This video, which is featured in the trial, was provided to CityNews by the court.”

Calgary is a city located in the Canadian province of Alberta.

The 2017 video was also published by other Canadian news outlets, such as CBC and Global News, in their reports about the police officer’s trial in late October 2020.