This video shows a blast in Tianjin, China, in 2015 -- before the coronavirus outbreak in Wuhan

A video of a large explosion has been viewed hundreds of times in multiple Facebook, Twitter and Vimeo posts alongside a claim that it shows a blast in January 2020 in the Chinese city of Wuhan, the epicentre of an ongoing novel coronavirus epidemic. The claim is false; the video shows a deadly explosion in Tianjin, a port city in northeast China, in August 2015.

This video has been viewed more than 250 times after it was uploaded to Vimeo on January 25, 2020.

The video, titled “Large Explosion in Wuhan, China”, contains the following caption: “This happened a few hours ago in wuhan likely the Chinese government began to kill its own people to control the virus”. 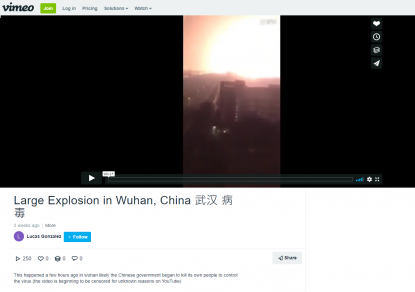 The novel coronavirus has killed more than 1,300 people and infected almost 60,000 others in China after it was discovered in Wuhan, AFP reported here on February 13, 2020.

The claim is false. A Google reverse image search of a keyframe from the video  found a longer version published here on YouTube. The video, which was uploaded on August 22, 2015, was titled “Massive EXPLOSION in Tianjin (CHINA) - All angles”.

Below is a screenshot comparison of the video in the misleading post (L) and the 2015 YouTube video (R): 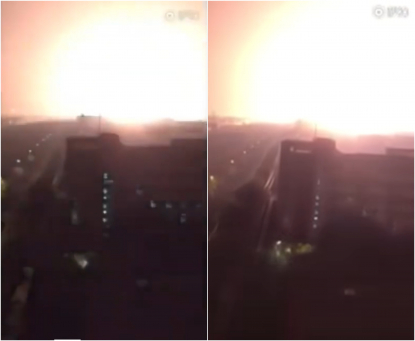 The explosion occurred on August 12, 2015, at a chemical warehouse in Tianjin, AFP reported in August 2015. The blast killed more than 170 people and prompted fears of toxic contamination.

In August 2015, AFP also published a video obtained by Chinese state media CCTV that shows a similar scene as the footage being shared in the misleading posts. Other similar user-generated content from the Tianjin blast was published here by the BBC and here by the Guardian.

AFP published its own footage from the scene, which shows smoke billowing from the destroyed warehouse, here on August 12, 2015.

AFP also took photos of the aftermath of the blast.

The caption of one of the photos reads: “Fire and smoke rise from the site of a series of explosions in Tianjin early on August 13, 2015. A series of massive explosions at a warehouse in the northern Chinese port city of Tianjin killed 17 people, state media reported August 13, as witnesses described a fireball from the blasts ripping through the night sky. CHINA OUT AFP PHOTO”. 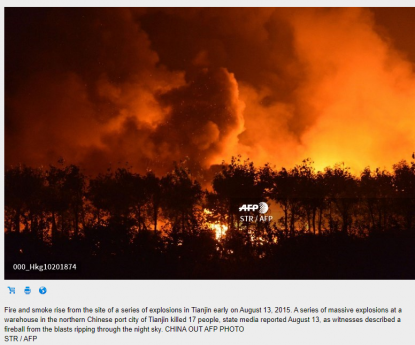