A video has been viewed millions of times in multiple Facebook, Twitter and YouTube posts alongside a claim that the footage shows the dislocated ankle of Everton football star André Gomes being popped back into place. The claim is false; the video predates the footballer’s injury in November 2019 by at least three months.

The video was published in this Facebook post on November 4, 2019, alongside the caption: “Must watch video, the real situation concerning Andre Gomes injury”. It has since been viewed 2.4 million times and shared nearly 40,000 times. 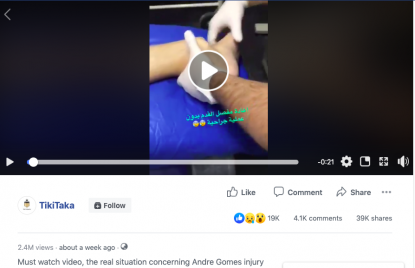 The Arabic script superimposed on the video translates to English as: “Resetting foot joint without surgery.”

André Gomes is a footballer for the English Premier League team Everton. He is also a midfielder for the Portuguese national side.

On November 4, 2019, the midfielder fractured his right ankle during a Premier League when he collided with Tottenham’s Son Heung-min, as this AFP article reports.

The claim is false; the footage predates the footballer’s injury by at least three months. It also shows a left foot rather than a right foot.

A reverse image search on Yandex found an earlier version of the footage published on Instagram here on July 18, 2019.

The Portuguese-language caption translates to English as: “ANKLE LUXATION – The luxation is the dislocation of one or more bones of a joint and it occurs when a force acts directly or indirectly over our body. In medical terms, it is defined as a loss of joint contact, in other words, the separation of two bones that are usually interconnected by cartilage. When the dislocation between the bones is partial and a part of each surface is in contact with the other, it is called a subluxation. The luxation can, sometimes, be related to a bone fracture, which can make it be mistaken for a sprain or a contusion. Luxation: dislocation of a bone. Sprain: injury caused by excessive movement of a joint. Contusion: injury in a part of the body (e.g., muscles).”

The Instagram account belongs to Diego Magalhães, who according to the bio is a 26-year-old physiotherapy student in Rio de Janeiro.

“Yes, the video is mine,” he told AFP via Instagram’s direct message on Friday, November 8, 2019. “It’s not André Gomes, someone made a fake news. I didn’t know the video was being shared as if it showed André Gomes’ injury”.