A video has been viewed thousands of times on Facebook and Twitter alongside a claim it shows Brazilians participating in a candlelit vigil after India's Prime Minister called for people to hold "solidarity" vigils on April 3, 2020 during the COVID-19 pandemic. The claim is false; the video was published online in reports about an event in Brazil before Modi’s calls for solidarity. 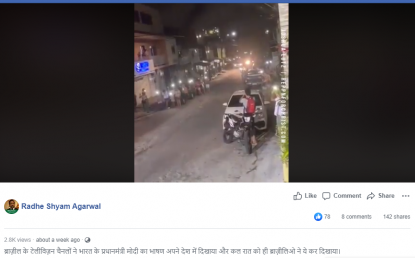 The post’s Hindi-language caption translates to English as: “Brazilian TV channels broadcasted Prime Minister Modi’s speech and see what the Brazilians did the night before.”

In a televised speech on April 3, 2020, Modi urged Indians to light lamps, candles and mobile flashlights on the evening of April 5 as a gesture of “collective resolve and solidarity” during the COVID-19 pandemic.

The same video was shared in other posts, for example on Facebook here, here and here and in tweets here and here, alongside a different claim that the footage shows people in Switzerland participating in India’s vigil.

“Look in the streets of Brazil! The people are turning to Jesus in prayer and worship. Can I get an Amen?” the post’s caption reads.

The same video was also shared on March 27, 2020 here on a Facebook page for Christians in Brazil.

“Our greatest goal is to reach the promises of the god together and live together with him,” reads the introduction of the Facebook page.

Audible voices in the video can be heard making religious remarks in Portugese. The audio translates to English as “I am in the hands of my Jesus.”

Local media reports, for example here on Brazilian news site Folha Vitoria and here on the website for Brazil's Radio 93 FM, stated Brazilians took to the streets nationwide to show solidarity during the COVID-19 crisis.