This video of a ‘politician’ being thrown in a river? It’s a dramatisation

Facebook users around the world have been sharing a video that appears to show a politician being shoved into a river by outraged locals, for failing to keep a promise made during his election campaign to build a bridge. But while many web users were delighted to see what they thought was a politician getting his just deserts, the man is, in fact, an amateur actor. The video was made by a Brazilian community group which stages scenes that reflect local problems.

The story appears to have resonated with voters who feel shortchanged by politicians, and the video has been viewed thousands of times via various posts including on Group Kenya, a Facebook group with more than two million members. We’ve archived the post here.

“What we should (do) to all politicians,” the caption read. “He promised to build a bridge after five years he comes back asking for votes with the same bridge promise.” 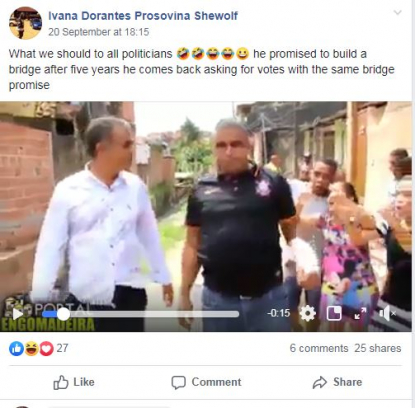 Screenshot taken on September 27, 2019 of the video as shared in Group Kenya

“This politician promised to build Bridge... Went Missing and came Back just before next elections to Promise them the Same Bridge. Can we do this in Malaysia,” said the caption.

Engomadeira is a suburb of Salvador, the capital of the northeast Brazilian state of Bahia.

The description on the longer clip, in Portuguese, included hashtags that can be translated as “#staging” and “#recording”, indicating that it likely showed a performance. 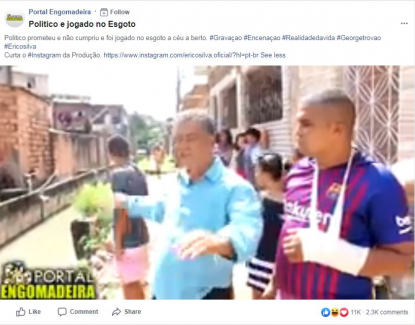 The longer version of the video, as published on the Portal Engomadeira Facebook page

The full caption can be translated as: “Politician made a promise he didn't keep and was thrown into an open-air sewer. #Recording #Staging #Lifereality #Georgetrovao #Ericosilva”.

This longer clip also includes movie-style text which identifies the video as a “production of Erico Silva”. 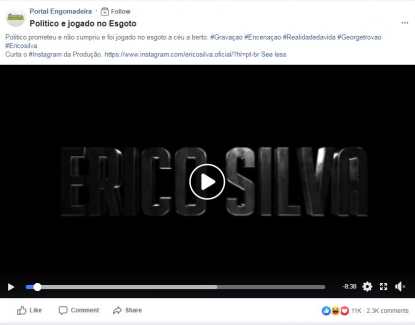 The full-length version identifies the video... 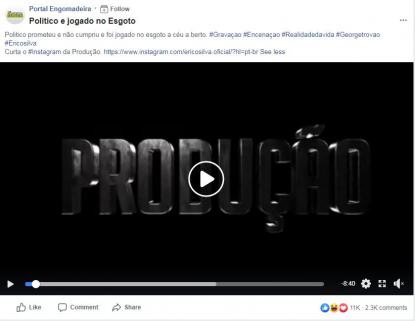 ... as a production of Erico Silva

The full video makes it clear that the scene is staged

AFP Fact-Check’s Brazil team watched the video and explained to us that the man in the light-coloured shirt is seen introducing himself as a candidate for local elections and promising improvements to the area, including ending the open-air sewage system. Around four minutes in, text appears reading: “The councillor has been elected, and has not kept his promises. He returned four years later.”

He is seen telling residents that he couldn’t help their community because there were too many things that needed doing elsewhere. Angry residents are seen booing him, and then he is pushed into the sewer he had promised to improve.

Around the seven-minute mark, a man appears with a microphone to interview the “politician” -- and at this point, it is revealed that the supposed councillor is, in fact, the vice-president of the Portal Engomadeira community group.

“We’ve made this video to show our people how much we have been deceived for four years. It's a long time to wait for everything to happen,” says the actor who plays the politician in the scene.

In an apparent response to confusion over the video, which has been viewed more than two million times, the Portal Engomadeira clarified that the scene had been staged to make a point about local politics.

“Was this truth, or role-play?” asked a Facebook user named Lew Ventura.

The group replied: “Friend, the problems shown in the videos are real, but it was staged with filming and actors to show that when politicians come here making promises, they will get this response (if they do not meet them).”

The Portal Engomadeira clarified in a comment that the video was staged.