It shows a man putting up a poster featuring a man’s face on a lamp post. A vehicle parked next to the lamp post displays flags for the ruling People's Action Party (PAP). The clip ends as the man appears to place the poster over another poster for the opposition, the Workers' Party (WP). 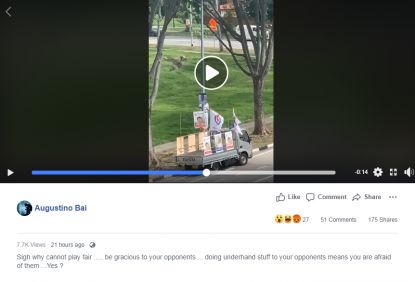 The post was shared shortly after Singapore dissolved its Parliament on June 23, 2020. A general election was held on July 10, 2020. The PAP retained power in the election, but its support fell sharply, while the opposition made gains, as AFP reported here.

The video was also shared here, here and here on Facebook with a similar claim.

A reverse image search on Google found a longer version of the video published here. The clip is one minute one-second in length.

Below is a screenshot comparison of the video in the misleading Facebook post (L) and the longer version (R):

The location of the video is Hougang, located in the North-East Region of Singapore. AFP found the location on Google Maps here.

Below is a screenshot comparison of the video in the misleading Facebook post (L) and the image on Google Street View (R):

The two candidates vying for the constituency were PAP’s Lee Hong Chuang and WP’s Dennis Tan Lip Fong. Tan won with 61.19% of the votes, according to the Elections Department Singapore (ELD) here.