Skip to main content
Performers dance next to floats of various states on Rajpath during the Republic Day parade in New Delhi on January 26, 2021. (AFP / Jewel Samad)

A video circulating online shows a replica of Delhi’s historic Red Fort at India's Republic Day parade in January 2021 while the Islamic call to prayer plays in the background. The clip was shared alongside a claim that the Delhi float only celebrated Islam. But the video has been misleadingly edited: in a longer version of the video, prayers for other religions, not just Islam, can be heard. Floats representing shrines from religions other than Islam can also be seen at the parade.

The clip was published on Facebook here on January 26, 2021. 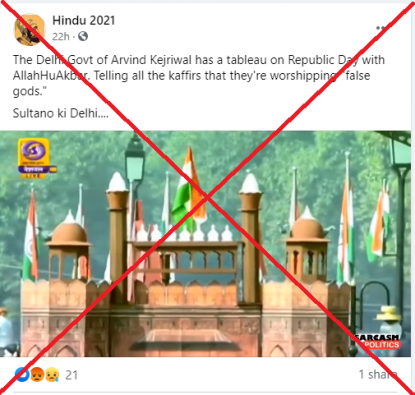 A replica of the iconic rampart of Delhi's Red Fort is seen passing by with the sound of the Islamic prayer call - ​​​"Allahu Akbar" - in the background.

“The Delhi Govt of Arvind Kejriwal has a tableau on Republic Day with AllahHuAkbar. Telling all the kaffirs that they're worshipping "false gods”. Sultano ki Delhi,” the caption reads.

Arvind Kejriwal is the chief minister of the Delhi state. "Sultano ki Delhi", meaning "Sultans’ Delhi" appears to be a reference to the Islamic empire that ruled Delhi and much of India between the 13th and 16th century.

“Delhi is neither secular nor tolerant. It’s been made clear with its very in-your-face tableau, which only belongs to Badshah [Mughal king],” Ranaut wrote. “Well in that case time to claim it. Hail India.”

“WTF, HOW dare they play that wail at the Republic Day Parade?” Vaidya tweeted.

The clip was also shared alongside a similar claim on Facebook here, here, here; and on Twitter here, here and here.

The clip, however, has been misleadingly edited.

A logo for India’s state-run broadcaster Doordarshan can be seen in the top left-hand corner of the screen. A keyword search found the full video of the floats, known as tableaus, representing Indian states at the 72nd Republic Day parade, published here on the Doordarshan's YouTube channel on January 26, 2021.

A closer analysis of the video found the Red Fort tableau, representing Delhi, passes through soon after the tableau for its neighbour, Uttra Pradesh’s tableau. This occurs at the video's 15-minute 50-second mark. The two tableaus are proceeded by the tableau for the southern Indian state of Karnataka.

“From Uttar Pradesh, we move to its neighbour, Delhi,” a woman narrating the broadcast says as the float passes through the parade to music and Islamic and Sikh prayers.

“Its theme: Shahjahanabad - redevelopment project,” she says. “The tableau reimagined inclusive streets with open public plazas, safe cycle lanes and accessible walkways. It disperse the sounds of prayer from diverse places of worship in the area”.

Replicas of different religious shrines  - the Mosque (1), Sikh Gurdwara (2), Church (3) and Hindu Temple (4) - are also carved onto the tableau as seen in the screenshot below: