A photo of a newspaper notice purports to show that the local government in the Indian capital of Delhi advertised monetary compensation only to Muslim victims of the city's recent sectarian violence. The image has been shared repeatedly in multiple posts on Facebook and Twitter alongside a claim that local officials will only compensate Muslims following the clashes. The claim is false; the image has been manipulated to add the word “Muslim”; the original advertisement did not specify that people of a certain religion could apply for the compensation.

The photo was published here on Facebook on March 3, 2020. 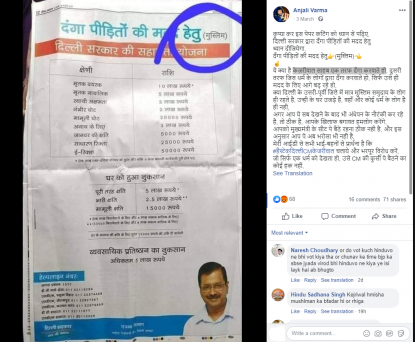 The first line of the Hindi text in the advertisement translates to English as: “For the relief of riot victims (Muslims) / Relief scheme by Delhi government”. It is followed by a list of the monetary compensation offered, ranging from one million rupees for the families of those killed and 15,000 rupees for those who suffered “minor” damages to homes during the recent sectarian violence in the city.

The post’s Hindi caption translates to English as: “Read this newspaper cutting closely, Delhi government offering relief for riot victims only to Muslims. Mr. Kejriwal, first you stoke the riots and then offer funds to the Muslims, who were used to incite the riots. Has only been Muslim homes damaged in the northeast part of Delhi, do only Muslims live there not anyone else? If you continue to do this disparity then we will revolt against you, you should not be the chief minister of Delhi and we don’t even trust you on that chair anymore. I appeal to all brothers and sisters to run a hashtag against Kejriwal who only sees religion. He doesn't deserve to sit on the chief minister’s chair.”

Kejriwal refers to the chief minister of Delhi, Arvind Kejriwal. He is also pictured on the bottom-right corner of the newspaper advertisement.

In recent weeks, Delhi has experienced its worst sectarian violence in decades. At least 50 people have been killed in the violent clashes triggered by Prime Minister Narendra Modi’s new citizenship law, as reported here by AFP on March 7, 2020.

The claim is false; the newspaper advert in the Facebook posts has been digitally altered to include the word “Muslim”.

A closer analysis of the photo in the misleading posts found the name of a local Hindi-language newspaper Dainik Jagran, in the top left corner.

Below is a screenshot of the image, with the name of the newspaper, circled in red by AFP: 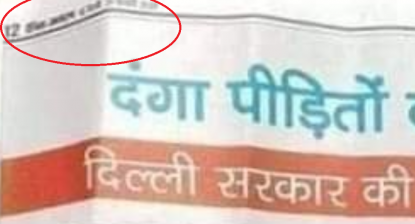 AFP located a digital edition of the same newspaper on its website and found that the advertisement in this copy does not have the word “Muslim” in its headline.

Below is a screenshot comparison of the image in the misleading Facebook post (L) and the advertisement on the digital edition of the Dainik Jagran newspaper (R) : 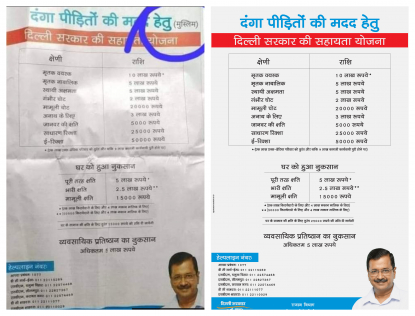 The same advertisement, without “Muslim” in its headline, was also published here on the Twitter account of Kejriwal’s political party, the Aam Aadmi Party, on February 29, 2020.

On its official website, the Delhi government published this notice with some information about monetary compensation for the victims of the recent sectarian violence in the city.

Below is a screenshot of the notice: 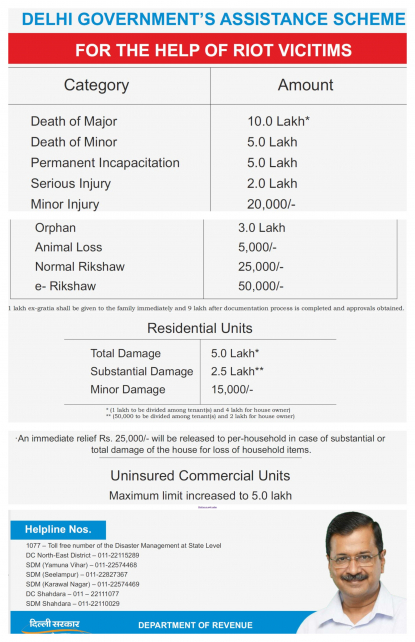 A screenshot of the Delhi government notice

Claimants must submit detail through this online form on the Delhi government website. It requires details of the claimant's name, location, business address, family members, voter ID number and contact details, but does not request the claimant to provide their religious affiliation.