Skip to main content
Farmers sit as they block a highway during their ongoing protest against the central government's recent agricultural reforms on the outskirts of Amritsar on February 6, 2021. (Photo by Narinder NANU / AFP)

A video shared on social media, including by spokesmen from India’s ruling political party, purports to show Delhi Chief Minister Arvind Kejriwal speaking out in support of controversial agricultural laws that have sparked mass farmers’ protests. However, the footage has been misleadingly edited; the longer version of the video from a TV news interview shows Kejriwal criticizing the legislation. 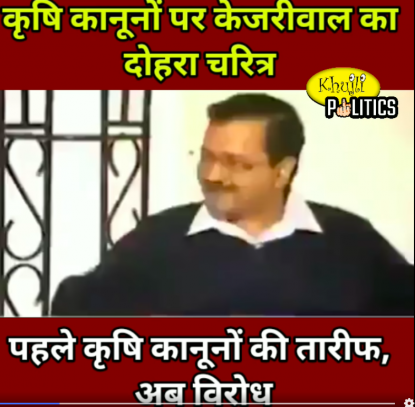 “Kejriwal’s hypocrisy on agricultural laws. Earlier he supported the laws as seen in the clip and now he is opposing them," reads the Hindi- language text superimposed on the footage.

Arvind Kejriwal is the chief minister of Delhi and leader of the Aam Aadmi Party (Common Man Party).

In the video, Kejriwal appears to make remarks in Hindi that translate as: “The farmers can now sell their crops anywhere in the country for good prices. This will be the biggest revolution in agricultural sectors in this country in the last 70 years.”

The post circulated as tens of thousands of farmers have been camping on the outskirts of Delhi since November 2020 and calling for a repeal of reforms that free up farm produce markets.

Police presence has been increased around the camps since India's Republic Day on January 26, 2021, when a tractor rally turned into a citywide rampage which left one farmer dead and nearly 400 police injured.

India’s ruling Bharatiya Janata Party spokesperson Sambit Patra and Tejinder Singh Bagga also posted the clip on their official Twitter accounts here and here on January 30, 2021, along with the caption, “Kejriwal explaining the benefits of the farm bills.”

The video was also shared alongside the same claim on Facebook here and here.

The clip, however, has been misleadingly edited.

A longer video of Kejriwal's comments show he was in fact criticising new farming laws.

A reverse image search on Google using keyframes of the video obtained with digital verification tool InVID-WeVerify found the original clip of an interview published here on a YouTube channel for "Zee Punjab Haryana Himachal news" on January 15, 2021.

At the video's 05:55 mark, Kejriwal explains: “BJP has fielded all its big leaders. Its senior ministers and chief ministers came forward to convince people that the bills will benefit the farmers. I have heard all of their speeches. Their leaders are saying that the farmers can now sell their crops anywhere in the country for good prices.”

At the 09:48 mark, Kejriwal adds: “These three farm bills should be repealed. And a law guaranteeing MSP should be introduced. MSP should be calculated by adding the cost after 50% profit to 50% of this value. If such a law is introduced then it will be the biggest revolutionary step in the field of agriculture in the last 70 years.”

Phrases from these two segments were deceptively edited together in the misleading clip so that Kejriwal appears to say: “The farmers can now sell their crops anywhere in the country for good prices. This will be the biggest revolution in agricultural sectors in this country in the last 70 years.”

Below is a screenshot comparison of the video shared in the misleadingly edited clip (L) and the YouTube video (R):

Showing his opposition to the law, Kejriwal also tore copies of the bill in the Delhi assembly, as reported here by the NDTV news channel on December 17, 2020.