Skip to main content
Australia's head coach Justin Langer joins his players during warm-up ahead of the 2019 Cricket World Cup in England on May 27, 2019. (Photo by Glyn KIRK / AFP)

A video has been viewed thousands of times on multiple Facebook, Twitter, and YouTube posts that claim it shows Australian men’s cricket coach Justin Langer’s angry reaction after his side lost a final game of the series against India on January 19, 2021. The claim is misleading; Langer's outburst in fact happened at The Ashes series between England and Australia in 2019.

“Priceless reaction from the Aussie coach today after India's victory in the final test,” the caption reads.

The footage shows Australian men’s cricket coach Justin Langer lashing out a kick, visibly annoyed, as crowds can be heard cheering in the background. “Pretty much sums us up, boys,” he says, packing his bags.

India pulled off a record victory in the final session of a series against Australia on January 19, 2021, handing the hosts their first defeat at Brisbane's Gabba ground since 1988. 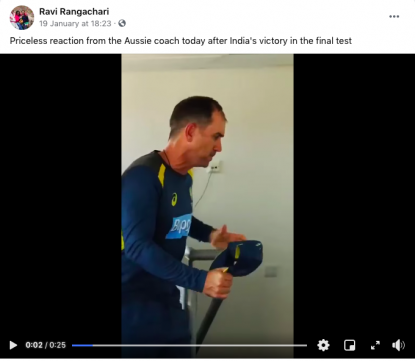 The misleading video was shared online in India after Australia’s defeat, including on Facebook here and here, on Twitter here and here and on YouTube here.

A reverse image on Google using keyframes from the video found a longer version of the footage uploaded here on March 22, 2020 on the official Twitter page of streaming service Amazon Prime Video.

The tweet reads as: “There is nothing quite like the drama of The Ashes. Behind the scenes with @CricketAus, we saw everything. Watch now on #PrimeVideo…”

"Could be a run out... oh he's fumbled! Lyon has fumbled!" - @nassercricket

There is nothing quite like the drama of The Ashes. Behind the scenes with @CricketAus, we saw everything.

After Langer’s outburst, text appears on the screen promoting the 2020 Amazon documentary series, The Test: A New Era for Australia’s Team.

The incident where Langer kicked at a waste bin in the dressing room took place during the 2019 Ashes series between England and Australia at the third test match played in Leeds from August 22, 2019 to August 25, 2019. Australia lost that game by one run. 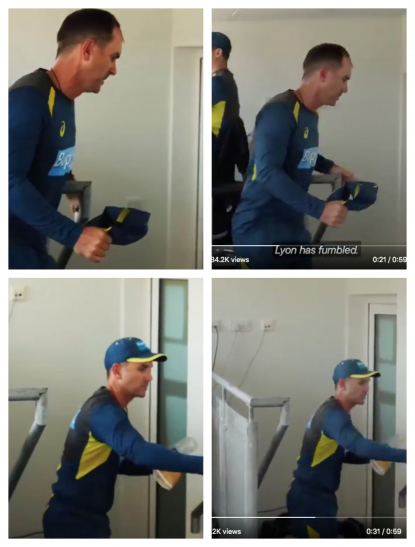 The same scene can be seen 20-minutes and 30-seconds into the eighth episode of the Amazon documentary.

Langer revealed in an interview with The Grade Cricketer podcast (at 29 minutes) that he wanted the waste bin kicking scene omitted from the documentary.