This video has circulated in reports since at least February 2020, weeks before the incident at a coronavirus quarantine facility in India

A video has been viewed thousands of times in multiple posts on Facebook, WhatsApp, Twitter and YouTube alongside a claim it shows a Muslim man spitting at Indian police officers after being detained over scuffles at a coronavirus quarantine centre in April 2020. The claim is misleading; the video has circulated in reports since at least February 2020, weeks before the incident at the coronavirus quarantine centre; local police told AFP the video shows an incident in February 2020 and is unrelated to the COVID-19 pandemic.

The 27-second video shows a man being subdued after purportedly spitting at uniformed officers. 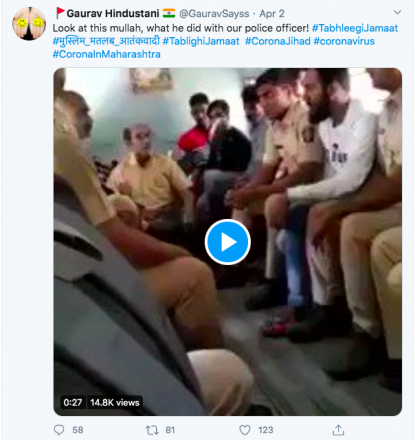 The post’s caption states: “Look at this mullah, what he did with our police officer! #TabhleegiJamaat #मुस्लिम_मतलब_आतंकवादी #TablighiJamaat  #CoronaJihad #coronavirus #CoronaInMaharashtra”

Mullah is a religious leader or scholar in Islam, and “Tabhleegi Jamaat” or “Tablighi Jamaat” in the hashtags are the names of an Islamic missionary movement.

The post was published one day after a scuffle broke out at a quarantine facility housing those who attended a religious gathering organised by Tablighi Jamaat in Delhi in March 2020. The congregation was later identified as a major novel coronavirus hotspot that killed at least 10 attendees, as stated in this AFP report.

On April 1, 2020, those quarantined at a facility run by Indian Railways in Tughlakabad area of Delhi reportedly “spat at” doctors over complaints about food, prompting a police response. Here is a report on the incident by the local English-language newspaper India Today.

The scuffles were also reported on by other Indian newspapers, including The Economic Times here and Deccan Herald here.

The same video was also shared here, here and here on Facebook; and here on YouTube alongside a similar claim.

A Google reverse image search using a keyframe generated by InVID-WeVerify, a video verification tool, found this longer version of the video. It was published on the Twitter account of the Indian newspaper Mumbai Mirror on February 29, 2020, weeks before the incident at the coronavirus quarantine centre in Delhi.

The tweet states: “Thane Police beat man for spitting on them.” 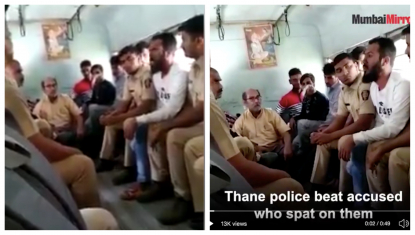 It is headlined: "Watch: Denied home-cooked food, undertrial attacks cop inside a police van in Thane.”

The report reads in part: “A 26-year-old undertrial allegedly attacked a few members of the police escort party after they did not allow him to have home-cooked food brought by his family members at a court in Mumbai, an official said on Saturday.

“[The suspect] got annoyed over this and started abusing the policemen. When he was being taken to jail in a police van, he started arguing with the members of the escort party. He spit on one policeman and manhandled another one. He also bit the finger of another policeman."

The incident was also reported by the Indian TV channel NDTV here and the daily English-language newspaper Times of India here.

Thane Police also rebuked the claim, saying the video is unrelated to the Tablighi Jamaat gathering. A spokesperson told AFP via Twitter direct message on April 14, 2020: “The incident in the video is old.”