A video has been viewed hundreds of times in multiple posts on Facebook and Twitter published in August 2020 alongside a claim it shows the aftermath of a tank driving through a crowd of protesters in Portland, US. This claim is misleading; the video previously circulated in reports about a traffic accident in August 2020 in southern Brazil; Portuguese can be heard spoken in the video. 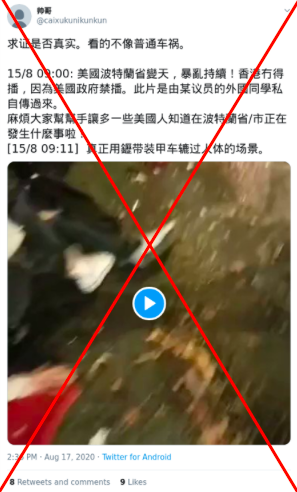 The post’s simplified Chinese caption translates to English as: “Want to know if this is real. Doesn’t look like a typical car accident. August 15, 09:00: Riot proceeds in U.S. Portland! This video is banned in Hong Kong because the US has banned the video and the European media cooperated with them, the outside world did not know about this; this film was sent privately from a foreign classmate of a certain congressman. Please share this post to let more Americans know what is going on in Portland/the city. August 15, 09:11: This is the actual scene of human bodies being driven through with tanks. ”

A reverse image search of keyframes extracted from the footage found an identical video published here on Twitter on August 6, 2020.

The tweet reads: “WARNING: some scenes may be unsuitable for some viewers. Yesterday from 2-3 days there was a car crash in Brazil after forest fire smoke blew onto highway, who killed a lot of people please pray for them and their family.”

Below is a screenshot comparison of the video in the misleading post (L) and the Twitter video (R): A screenshot comparison of the misleading video and the Twitter video.

Closer examination of the video also revealed a voice saying "My daughter is still alive" in Portuguese at the 18-second mark.

A subsequent keyword search found this August 3, 2020 report by Brazil-based news website Metropoles about an accident involving 22 vehicles on a highway in São José dos Pinhais city of Paraná, Brazil.

The report’s Portuguese headline translates to English as: “Photos show destruction in a serious accident in Paraná; eight died”.

It reads, in part: “A very serious accident involving 22 vehicles on the BR-277, in the region of motels in São José dos Pinhais, in the metropolitan region of Curitiba, caused eight deaths on Sunday night (2/8).

“The accident involved a truck, five motorcycles, 15 cars and a Military Police (PM) vehicle. About ten ambulances were called. In all, 22 were injured at the scene.”