A video has been viewed thousands of times on Facebook and Twitter alongside a claim that it shows bodies being removed from a hospital in Iran during the novel coronavirus pandemic. The claim is false; the video has circulated in reports since at least August 2019 about a funeral procession for pilgrims who died during the annual Islamic pilgrimage to Saudi Arabia's Grand Mosque.

The two-minute and 22-second video was published on Facebook here on February 27, 2020. The video has been viewed more than 3,600 times. 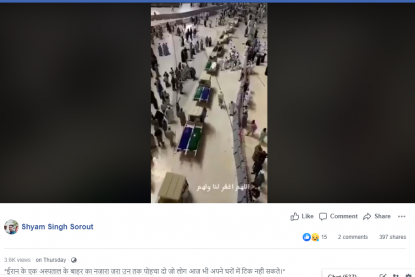 The post's Hindi-language caption translates to English as: “This is a scene outside a hospital in Iran. Please convey this to the people who cannot stay at their homes even these days.”

The caption makes reference to the Indian government’s decision to impose a three-week nationwide lockdown in an attempt to curb the spread of COVID-19, the disease caused by the novel coronavirus.

A reverse Google image search using video keyframes extracted with InVID-WeVerify, a video verification tool, found the footage has circulated in reports about the bodies of worshippers who died during Hajj in Saudi Arabia.

A screenshot of the video was published here in an Arabic news report on August 17, 2019, several months before COVID-19 was first detected in the Chinese city of Wuhan.

“Beautiful scene, funeral prayer for 58 pilgrims, who died during the pilgrimage in their Ihram (white dress), at the sacred mosque,” the report reads.

Below is a screenshot comparison of the photo published in the media report (L) and the video shared in the misleading Facebook post (R): 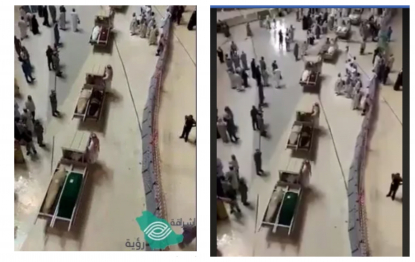 The same video was also published on YouTube here and here on August 16 and 17, 2019 respectively. Both of the posts' descriptions state the footage shows worshippers who died during Hajj that year.

The pilgrim deaths were also reported in this article by Bangladesh-based newspaper The Daily Star and this report by Turkish news organisation Anadolu Agency.

More than two million Muslims from across the world travelled to Mecca to participate in Hajj in August 2019, AFP reported here.