A video has been viewed thousands of times in multiple posts on Facebook which claim it shows bodies of novel coronavirus victims being thrown into a ditch in Italy. The claim is false; the footage was taken from the 2007 US television programme Pandemic.

The 18-second clip shows a truck dropping bodies wrapped in plastic into a ditch. The Islamic song “Har Khata Pe Sharamsar Hoon Main” can be heard playing throughout the video. 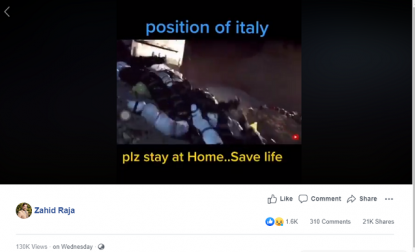 The blue and yellow text overlaid on the video in the misleading post reads: “position of italy / plz stay at Home..Save life.”

The post's Urdu-language caption translates to English as: “See the situation of Italy. Be afraid of a time like this and still take precautions for yourself and for your loved ones.”

COVID-19 was first detected in the Chinese city of Wuhan in December 2019. As of March 31, it has killed more than 36,000 people and infected almost 754,000 others worldwide, according to data provided by the World Health Organization (WHO).

The video has also been shared here, here, here and here on Facebook, alongside a similar claim.

Several Facebook users commented on the post saying the video was not genuine, and had been taken from Pandemic, a television series that aired in the US in 2007.

The misleading video can be seen at the one-minute 24-second mark of the YouTube video.

Below is a comparison of screenshots from the video in the misleading posts (L) and keyframes of the YouTube video (R) : 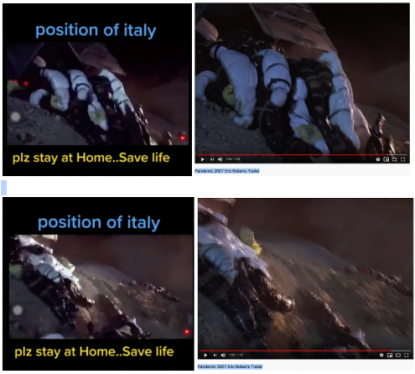 Pandemic is a television mini-series that aired in 2007, starring Tiffani Thiessen and Eric Roberts. According to the online movie database IMDb, the series tells a story of “a doctor from the CDC racing to find a vaccine as the bird flu virus spreads through Los Angeles”.