A video has been viewed millions of times in multiple posts on Facebook, Twitter, YouTube and TikTok, alongside a claim that it shows an Islamist group, the Islamic Defenders Front (FPI), being expelled from the Indonesian city of Semarang. The video was posted shortly after FPI organised mass events during the pandemic in November 2020, sparking widespread criticism. The claim is misleading; the video has circulated in media reports since 2017 about Semarang residents rejecting FPI’s plan to set up a branch in their city.

The two minute 50-second footage was published here on Facebook on November 20, 2020. It has been viewed more than 1.4 million times.

The Indonesian-language post translates to English as: “FPI is expelled from Semarang city.
Hopefully other cities will follow soon.”

The text superimposed on the video reads: “FPI is expelled from Semarang….”. 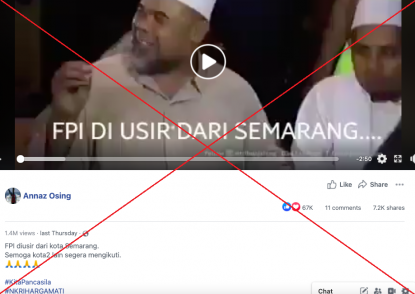 FPI refers to the Islamic Defenders Front, an Islamist group in Indonesia.

Semarang is the capital city of Central Java province.

The video circulated shortly after widely criticised mass gatherings organised by FPI and its leader Rizieq Shihab, flouting health protocols during the pandemic. Rizieq returned from Saudi Arabia on November 10, 2020, where he claimed he had been living in exile.

The caption of the 11-minute seven-second video reads: “Inside Zainal Petir's house in Bulu Lor Village, North Semarang, there was a heated dialogue between figures from the FPI’s Central Java branch and representatives of mass organisations on Thursday night (13/4/2017). Some people are going to establish and inaugurate the FPI in Semarang City. However, tens of mass organisations and residents opposed and even thwarted the event.”

The scenes seen in the misleading post can be seen from the eight-minute 16-second mark.

Below is screenshot comparison between the footage in the misleading post (L) and Tribun Jateng’s video (R): 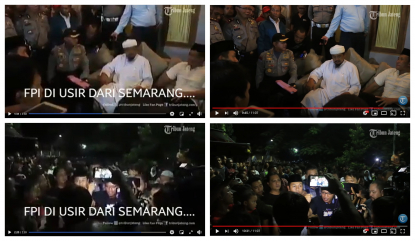 Indonesian news site Detik.com published this report about the incident on April 14, 2017, headlined: “The establishment of FPI Semarang rejected by people, thwarted by the police”.

The report's first two paragraphs read: “The Islamic Defenders Front (FPI) planned to establish a branch in the city of Semarang. However, it failed because a number of mass organisations rejected the plan. Semarang Police Chief Sr. Comr. Abiyoso Seno Aji felt that Semarang City would be safe without FPI.

“The FPI’s inauguration plan in Semarang City was carried out at the house of Zaenal Petir, advocacy chairperson of the FPI Central Java branch, at Jl. Pergiwati I No.19, Bulu Lor, North Semarang, Thursday night. However, some members of mass organisations arrived at the location. At least 400 police officers provided security.”