A video of a man crying in fear while a nurse attempts to give him an injection has been viewed tens of thousands of times in multiple Facebook, Twitter and YouTube posts alongside a claim that it shows Thailand's health minister receiving the Covid-19 vaccine. The claim is false: the video has circulated in reports since February 2018 about a nurse trying to give a man in China an injection. In the clip, the nurse and the man can be heard speaking Mandarin. 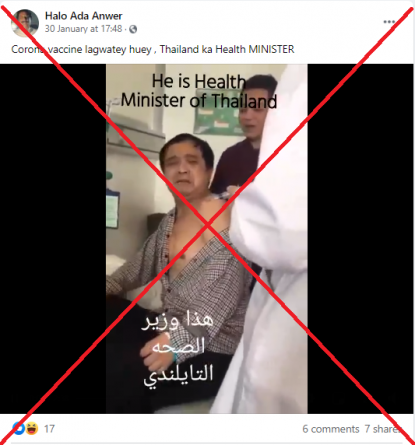 Texts in English and Arabic on the video screen also claim the man is the "health minister of Thailand".

In the video, the man repeatedly squeals and recoils as a nurse tries to give him an injection.

The clip circulated online as many countries rolled out mass Covid-19 vaccination campaigns. Online misinformation has been blamed for a so far slow uptake of the vaccine in countries including India.

The video was also tweeted by Pakistani-Canadian journalist and author Tarek Fateh alongside a similar claim.

The claim, however, is false. The video does not show Thailand's health minister and it has circulated online almost two years before the outbreak of the coronavirus pandemic.

The video is titled: “Chinese man scared of his first ever injection”. It provides subtitles for the clip. The man and the nurse in the video can be heard speaking Mandarin.

As she attempts to give the man the injection, the nurse can be heard saying: "Can you please turn around?"

The man can be heard saying: "Oh my god!"

Text on the video reads: “It is unclear if the injection was eventually performed".