A video has been viewed tens of thousands of times in multiple posts on Facebook and Twitter alongside a claim it shows Sikhs chanting in support of Pakistan at a protest in India. The posts were shared as farmers in India demonstrated against new agriculture laws. The claim is false; this video has circulated online since October 2015 in reports about a protest over the alleged desecration of a Sikh holy book in Indian-administered Kashmir.

The one-minute six-second video was shared here on Facebook on December 10, 2020. It has been viewed more than 54,000 times. 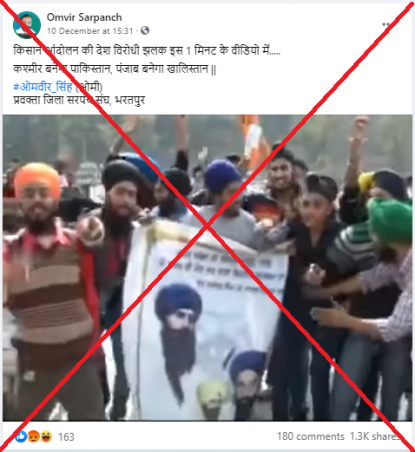 The post’s Hindi-language caption translates to English as: “See the seditious side of the farmers' agitation in this one-minute video. Kashmir will become Pakistan, Punjab will become Khalistan”.

The people in the video can also be heard chanting: “Kashmir will become Pakistan” and “Punjab will become Khalistan”.

The misleading post was shared as farmers in India demonstrated against new agriculture laws, as AFP reported here.

A reverse image search on Google of keyframes extracted from the video in the misleading posts found a longer version of the video published here on YouTube on October 18, 2015.

The video description reads, in part: “Sikh protesters on Sunday shouted pro-Pakistan slogans during a protest against the desecration of Guru Granth Sahib, the holy scripture of Sikh religion, at Baramulla in north Kashmir.” 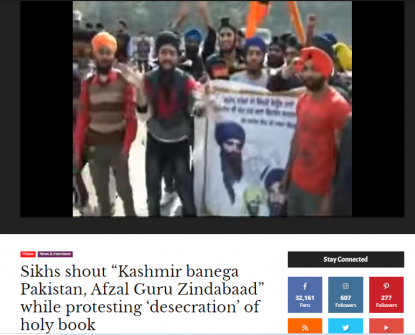 It reads, in part: “A ‘bir’ (holy book) was ‘desecrated’ in Bargari village, 15 km from Kotkapura in Punjab, leading to tension on October 12. Over 100 pages of the Sikh holy book were found scattered on a street near a gurdwara. The holy book had been stolen from a gurdwara in June.”

The protest was also reported by other media in October 2015, including US-based Time magazine here and Indian newspaper Deccan Chronicle here.