Skip to main content
A medical staff member wearing protective gear takes a swab from a woman to test for the Covid-19 coronavirus at a temporary testing station outside Seoul station in Seoul on December 14, 2020. (Photo by Jung Yeon-je / AFP) (AFP / Jung Yeon-je)

Multiple posts shared repeatedly on Facebook claim that South Korean frontline health workers are paid US $13.35 (14,600 South Korean won) per day during the coronavirus pandemic. The claim is false; South Korea's Health Ministry told AFP that the figure is a subsidy paid to frontline workers, not their total wage.

The claim was shared here on Facebook on 13 December 2020 alongside a partial screenshot of a document.

Part of the Korean-language text in the image translates to English as: “Payment standard. Base payment: 14,600 won (per day). 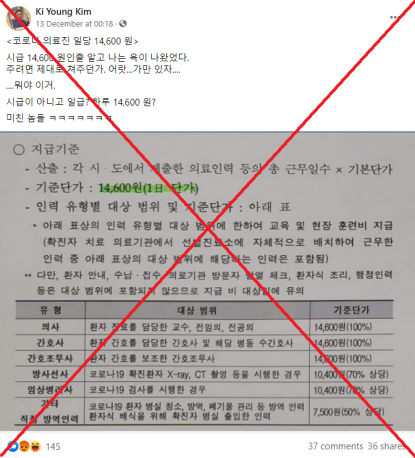 Yoon Jeong-hwan, the head of the human resources management team at South Korea’s Central Disaster Management Headquarters, told AFP that the figure in the misleading post is the “extra allowance” paid to frontline healthcare workers across the country “to boost their morale”. It does not equate to their daily wage, he said.

“The subsidy came in place after South Korea approved the third additional budget in July, which included such extra allowances for healthcare workers. While some regions may make the payments at different times, the base payment of 14,600 won is the same across the country,” he told AFP by phone on December 18, 2020.

Through a combined keyword search AFP found the image in the misleading Facebook post was taken from this report by South Korean politician Kang Yonggu. It argues the range of subsidies being paid to frontline workers treating Covid-19 patients is “problematic”.

The December 14, 2020 release included a statement cricitising the country’s health authorities for allowing such a discrepancy in payments among different departments. It also criticised the fact that part-time and administrative staff are not eligible to apply for the government subsidies.

In response to the misleading posts, he told AFP during a phone conversation on December 17, 2020: “The figures in my report accurately refer to the government subsidies paid to healthcare workers”.