A video has been shared in multiple posts on YouTube and Facebook in 2019 alongside a claim that it shows a girl getting her head stuck on an escalator at a mall in Singapore. The same video has been viewed more than 100,000  times after being shared on Facebook by a Singapore community page which regularly posts Singapore content. The video has been shared in a misleading context: it has been circulated in media reports from at least July 2018 about a girl who got her head stuck while riding an escalator at a mall in China.

The 25-second video was shared on YouTube here by a channel named Singapore Breaking News on November 13, 2019.

The video’s title states: "girl plays at escalator and her head almost gets decapitated in mall singapore sg fail".

Below is a screenshot of the video in the misleading post: 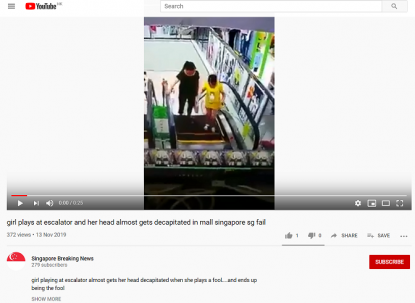 The video’s caption reads: “girl playing at escalator almost gets her head decapitated when she plays a fool....and ends up being the fool.”

The same video was included in a report shared here by a Facebook page named “Singapore Breaking News Network”. The caption states: “SG Seen: Girl Plays on Escalator and almost loses her Head.”

The same video has been viewed more than 100,000 times after being shared here, with a similar claim, by Facebook page “All SIngapore Stuff”, which regularly posts content about Singapore.

The post’s caption did not explicitly specify the incident happened in Singapore, but comments by some Facebook users on the misleading post suggested they believed it showed an incident from Singapore.

One person wrote: “So mesmerised by the 02 onlookers... perfect example of a typical singaporean…”

Another commented: “This is how Singaporean react RUNS AWAY.” 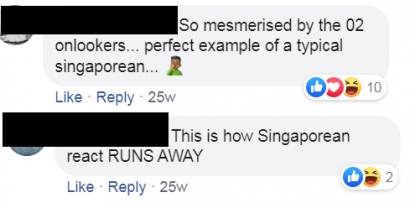 The video has been shared in a misleading context: it has been circulated in media reports since at least July 2018 about a girl who got her head stuck on an escalator at a mall in China.

The same video was included in this report published by the English-language news outlet Shanghaiist on July 19, 2018.

The report states in part: “A girl nearly got her noggin taken off recently while riding up an escalator in a shopping mall in the Jiangxi city of Jingdezhen. Surveillance footage shows the girl playfully leaning over the escalator railing while ascending. About halfway up, her head appears to become stuck. Fortunately, she just manages to pull it free at the last possible moment.”

Below is a screenshot comparison of the video in the misleading posts (L) and the video published by the Shanghaiist (R):

An edited version of the same video was also included in this longer video report published by the South China Morning Post on July 18, 2018.

The report’s caption reads: “Watch the terrifying moment a girl in China got her head trapped by an escalator.”

The report states the incident happened at a mall in Jingdezhen, Jiangxi province.

Some news reports published in July 2018 say the video showed an incident in Liaoyang City in north eastern China, including this report by MailOnline, website of UK-based newspaper Daily Mail.

The same location was stated in this report published by Chinese language site East Day on July 16, 2018.