A video of a young man reciting verses from the Koran apparently on the popular television show “Britain’s Got Talent” has been viewed hundreds of thousands of times in Facebook posts that claim the audience of the talent show was “mesmerised” by the performance. The claim is false: the video has been edited, adding clips of the Koran recital; the Indonesian YouTuber who created the edited video marked it as a parody.

In the video, a young man recites verses from the Koran while standing before a hoarding of the popular television show “Britain's Got Talent” as the jury and audiences appear to be spellbound and some wiping off tears.

The Urdu-language caption on the post translates to English as: “Recitation of Koran mesmerized everyone during American Talent show – Praise to be Allah.” 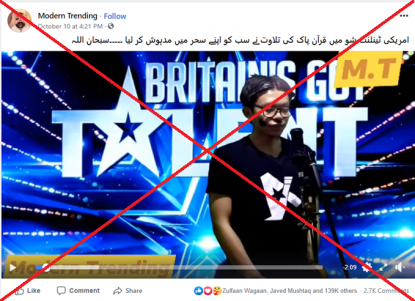 The same video has been shared here, here and here on Facebook, alongside a similar claim.

The purported performer stands against a background that reads “Britain’s Got Talent”, but a number of the judges that appear in the clip are actually members of another talent show panel, the British version of “The X Factor”.

A reverse image search of the video keyframes on Google led to this 2015 YouTube video of The X Factor UK show, from which the clips appear to have been taken. 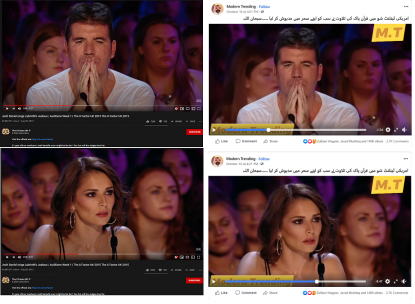 The footage used in the misleading posts has been taken from a parody video -- posted here on December 11, 2019, on the YouTube account of Aya Ibrahim Channel, which is based in Indonesia.

The man in the video has a big black mole on his cheek, and his name “Tompel” means mole in Indonesian language.

Aya Ibrahim, the Indonesian YouTuber, also posted a  shorter version of the video on his Instagram account here on December 13, 2019, with a caption: “BRITAIN'S GOT TALENT PARODY”.

At the 10-minute mark of the YouTube video, behind the scenes shots and credits appear, mentioning Aya Ibrahim is the scriptwriter, director and make-up artist of the edited clip.

This part is not included in the video in the misleading posts.

Below is a screenshot comparison of screenshots of the parody video (L) and the misleading video on Facebook (R):