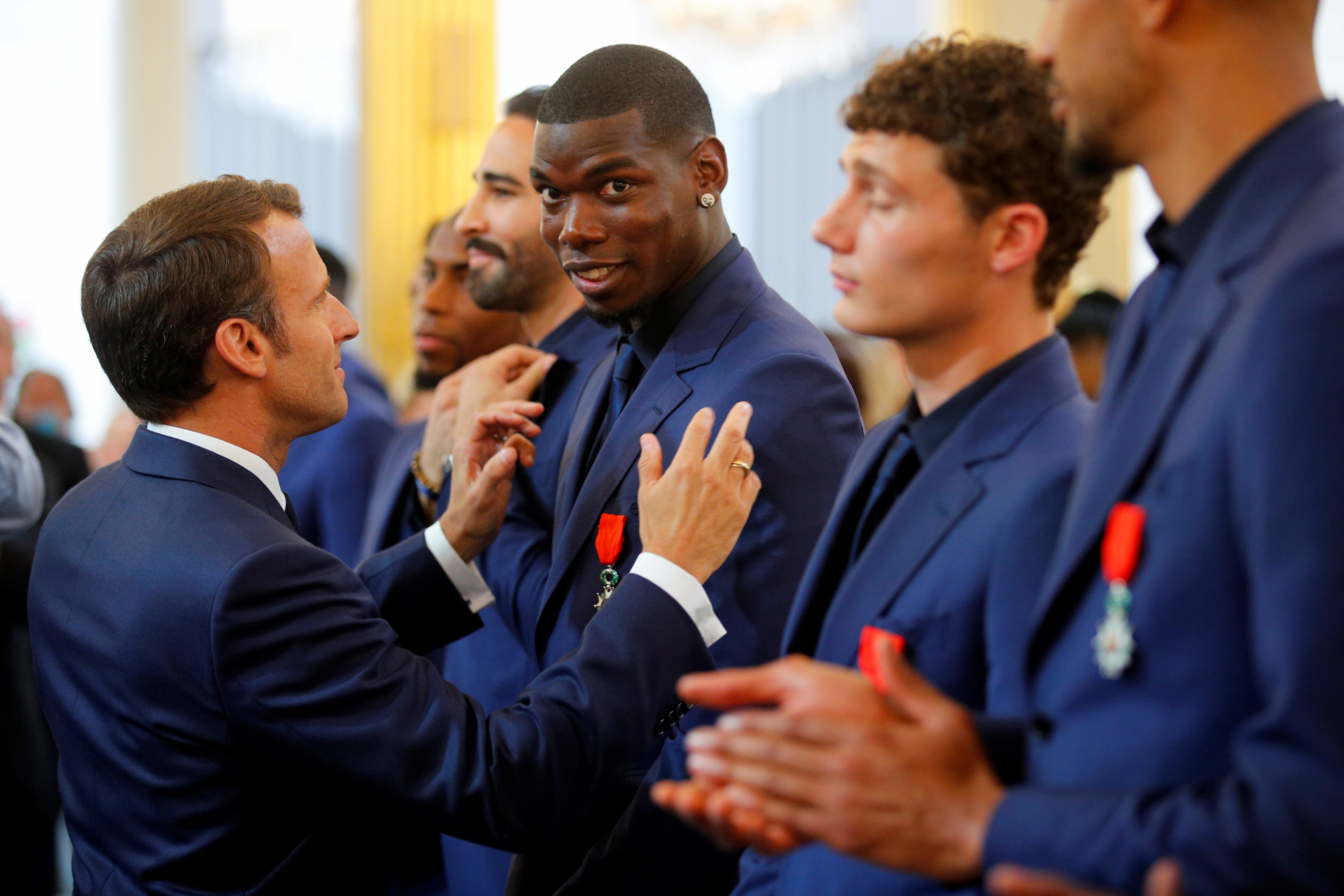 Numerous posts shared hundreds of times on social media in Africa claim that French football player Paul Pogba has retired from the international game in protest against French President Emmanuel Macron’s recent comments about radical Islam. However, the claim is false; the football star has dismissed the reports which originated from an Egypt-based sports website.

Pogba plays for British club Manchester United and internationally for France. The claim that he had quit the national team appears in several social media posts in Nigeria, including this one on Facebook by a page called Sahara Reporters Hausa.

The post, which was written in Hausa and English and features images of Pogba and Macron, has been shared nearly 600 times since it was published on October 26, 2020. English is Nigeria’s lingua franca, while Hausa is largely spoken in the majority-Muslim north. 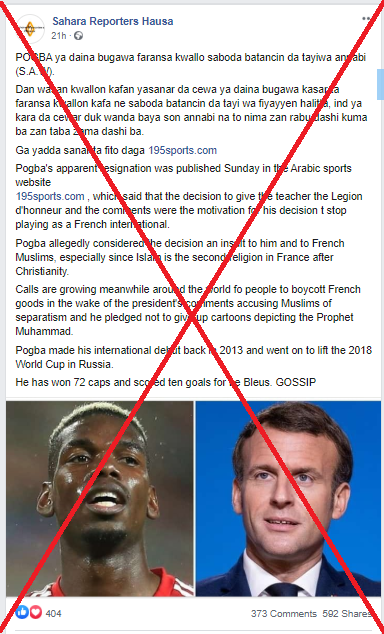 The post begins in Hausa, claiming that the French footballer had announced that he was quitting the national team following “insults directed at the Prophet” by Macron.

Then, it goes on to say in English that “Pogba’s apparent resignation was published Sunday in the Arabic sports website 195sports.com, which said that the decision to give the teacher the Legion d’honneur and the comments were the motivation for his decision” to end his international career.

This is in reference to the murder of 47-year old teacher Samuel Paty, who was beheaded in a Paris suburb after he showed cartoons of the Prophet Mohammed during a class on free speech. These were the same images that sparked a deadly attack on the offices of satirical magazine Charlie Hebdo when they were originally published five years ago. 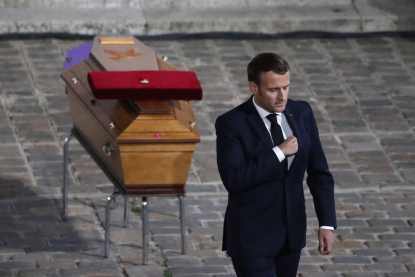 President Macron paying his respects on October 21, 2020, to Samuel Paty, who was beheaded in a Paris suburb. (Photo by Francois Mori / POOL / AFP)

Following his murder, France’s president promised to intensify a clampdown on Islamist extremism in the country. Paty was posthumously awarded the Légion d’Honneur, which is the country’s highest civilian award.

The claim about Pogba’s resignation was also published by Nigerian television station Arise TV, which shared it on Facebook, Twitter and Instagram, while LegitNG -- the country’s most visited domestic news site according to Alexa website traffic rankings -- published the claim on its Hausa blog.

The claim about Pogba also circulated on social media in other African countries, including in South Africa, Ghana, Kenya, Cameroon, Zimbabwe and Egypt. Many of the posts cited the source of the information as British tabloid The Sun. 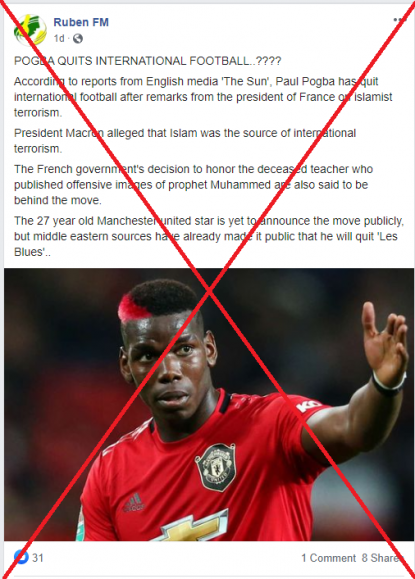 Pogba not retiring from international football

There is no evidence that World Cup winner Pogba decided to end his international career after remarks by the French president. Neither he nor his representatives made any public statements to this effect.

The Manchester United star himself dismissed the claim on his social media accounts.

On Instagram, he posted a screenshot of The Sun’s headline, with the stamp “unacceptable fake news” plastered over it.

“I am appalled, angry, shocked and frustrated some 'media' sources use me to make total fake headlines in the sensible subject of French current events and adding my religion and the French National Team to the pot,” Pogba wrote in the post.

So The Sun did it again... absolutely 100% unfounded news about me are going around, stating things I have never said or thought. I am appalled, angry, shocked and frustrated some “media” sources use me to make total fake headlines in the sensible subject of French current events and adding my religion and the French National Team to the pot. I am against any and all forms of terror and violence. My religion is one of peace and love and must be respected. Unfortunately, some press people don’t act responsibly when writing the news, abusing their press freedom, not verifying if what they write/reproduce is true, creating a gossip chain without caring it affects people’s lives and my life. I am taking legal action against the publishers and spreaders of these 100% Fake News. In a quick shout out to The Sun, who normally could not care less: some of you guys probably went to school and will remember how your teacher said to always check your sources, don’t write without making sure. But hey, seems you did it again and on a very serious topic this time, shame on you! #fakenews #AllezLesBleus @equipedefrance

“I am taking legal action against the publishers and spreaders of these 100% Fake News,” he added.

Using the social media monitoring tool CrowdTangle, AFP Fact Check traced the first instance of the claim to a report on 195sports.com.

Although both the Egyptian site’s article and The Sun’s article have now been amended here and here following the footballer’s reaction, the original versions are still accessible as archives here and here.

195sports’s original report did not mention the source of the claim but later attributed it to unnamed “sources”.