A video has been viewed more than one hundred thousand times on social media in February 2021 which claims the Philippines changed the name of its biggest international airport in Manila to remove a reference to a former senator. The claim is false: as of February 16, 2021, a bill has been filed in Congress to change the airport's name, but has not been passed. The agency that manages the airport said its name had not been changed.

NAIA was named after former Philippine senator Benigno “Ninoy” Aquino Jr. who was assassinated at the airport on August 21, 1983.

“Noynoy” is the nickname of Aquino Jr. son, Benigno Aquino III, who was Philippine president from 2010 to 2016. 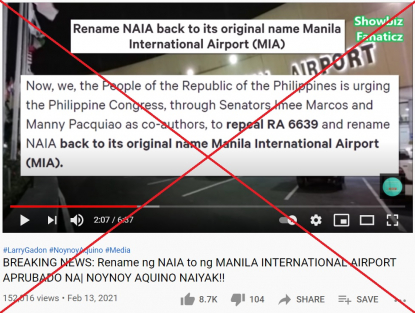 A screenshot of the misleading post, taken on February 15, 2021

"Rightly so. Many Filipinos have been fooled by the Aquinos," one YouTube user commented. "[Marcos] was the real hero."

"Good news! We don’t like [the] Aquinos for [they] didn’t do anything good in our beloved country," another user commented.

The comments allude to the political rivalry between Aquino Jr. and the late dictator Ferdinand Marcos, who is accused of embezzling at least US$10 billion from the national coffers during his 20-year rule.

Marcos was deposed in 1986 and succeeded by Aquino Jr’s widow, Corazon.

The dictator’s heirs staged a spectacular political comeback after he died in 1989.

Their efforts to rehabilitate the Marcos image also received a boost with the 2016 election as president of ally Rodrigo Duterte, who allowed the remains of the dictator to be interred at a national heroes' cemetery in Manila, AFP reported here.

In 2020, Paolo Duterte, the president's son, co-authored a bill in Congress seeking to rename the airport “Philippine International Airport". The proposed name "bears... no political agenda," he said.

An identical video was also shared alongside a similar claim here and here on Facebook; and in blogs here and here.

“NAIA has not been renamed,” a representative for Manila International Airport Authority, the government agency that manages NAIA, told AFP in a phone interview on February 15, 2021.

The misleading video in fact cites an online petition posted on the website change.org urging Congress to rename NAIA to Manila International Airport.

A search on the House of Representatives website found that while a bill had been filed in Congress seeking to rename NAIA, it remains pending at the committee level as of February 15, 2021.

A screenshot of the bill pending in Congress, taken on February 15, 2021

The misleading video also shows footage of lawyer Larry Gadon, a prominent Marcos supporter, who had earlier asked the Philippine Supreme Court to repeal the law that named the airport after Aquino Jr.

The court dismissed the petition in September 2020, according to multiple news reports by CNN Philippines, ABS-CBN News and the state-run Philippine News Agency.

Keyword searches on Google found no reliable reports NAIA had been renamed in February 2021.