A video has been viewed more than one million times in multiple posts on Facebook, Twitter and YouTube which claim that it shows an elderly woman telling pro-democracy protester "terrorists" in Hong Kong to leave a rally and stop attacking police. The claim is misleading; longer videos of the same incident show the same woman criticising police and telling them to back off, after pleading with the protesters to leave.

The video has been published repeatedly on social media, for example here on YouTube on July 28, 2019 where it has been viewed nearly 700 times.

The post’s Chinese language caption translates to English as: “An elderly woman, who is a resident of Yuen Long, cried and asked black-shirted terrorists to leave and stop attacking police (July 27, 2019)”. 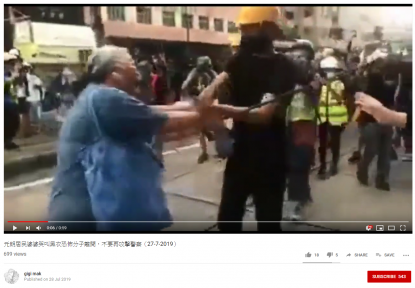 Protesters clashed with police in Yuen Long on July 27 at a demonstration against suspected triad gangs who beat up pro-democracy demonstrators there one week previously. Here is an AFP report about the protest.

The 34-second video shows an elderly woman screaming at protesters in Cantonese, saying: “Go away, walk off.. Leave!”

At the three second mark, she can be seen blocking black-shirted protesters with her body, waving her arms and brandishing her walking stick.

At the nine second mark, several protesters in helmets, goggles and face masks can be heard saying to her: “Please go back to the sidewalk... It’s very dangerous here.”

Riot police with shields, helmets and gas masks, can be seen standing on the opposite side of the road.

The same video has been viewed tens of thousands of times here on YouTube alongside a similar claim, and here on Facebook with the following Chinese language caption, which translates to English as:

"These rioters are pushing people in Yuen Long to breaking point.”

A longer version of the video, with extra footage, has been viewed more than a million times here and here on Facebook and here on YouTube alongside a claim that states: “Elderly woman asks ‘yellow ribbons’ to leave and stop messing up Yuen Long”.

Yellow ribbons have been a symbol of the pro-democracy movement in Hong Kong since 2014, when the city’s major thoroughfares were blocked for nearly three months during the Umbrella Movement, AFP reported here in October 2014.

The claim is misleading; other videos of the same incident show the same woman criticising police and telling them to back off, after pleading with the protesters to leave.

In this clip captured by Campus TV, the old woman turned to face police after telling protesters to leave.

She can be seen walking towards police at around the one minute and 15 second mark of the clip, saying, “You can shoot me blind.. I'm not afraid of dying."

This video published on Facebook on July 28 shows the same scene filmed from a different angle.

The same woman, whose face is blurred, can be seen standing between the protesters and police at the same location in Yuen Long.

Between the three to 11 second mark, the woman can be seen facing protesters and saying, “Please leave.. I don’t believe in police. Please leave soon, be good. You have a long life ahead, while mine is near the end.”

To which someone from the protesters’ camp responded, “We’ve promised not to cause any trouble.”

At the 18 second mark, she faces police and says, “Leave! Back off! You’ve only arrested 12 people!”

A police announcement is broadcast at the 20 second mark saying: “Stop all unauthorised gatherings immediately and disperse peacefully.”

Immediately afterwards, some protesters can be heard saying, “We are only here because you colluded with triads.”

Laurel Chor, a Hong Kong-based freelance journalist who has been following the protests, took a photo of the same woman, as seen in this July 28 tweet.

I got this shot of her yesterday. She was furious and fearless. (@GettyImages) https://t.co/FWDTbzYfDg pic.twitter.com/o8y7W6rG8K

The tweet is captioned: “I got this shot of her yesterday. She was furious and fearless.”

Chor told AFP in Twitter DM on July 29: “When I saw her, she was yelling at police and telling them to not be violent towards protesters. She was definitely angry with them.”