A video has been viewed hundreds of thousands of times in multiple posts on Facebook and YouTube alongside a claim it shows Japanese officials setting off fireworks that were originally intended for the now-postponed Tokyo Olympics. The claim is false; the video is a computer-generated simulation that was created in 2015 by a YouTube user.

The video was published here on Facebook on August 13, 2020. It has been viewed more than 1.3 million times. 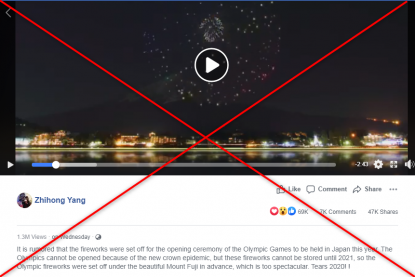 On March 30, 2020, organisers of the Tokyo Olympics decided to postpone the event until July 23, 2021 due to the coronavirus pandemic, as reported here by AFP.

The video was also shared on Facebook here, here and here; and on YouTube here and here, alongside a similar claim.

A reverse image search and subsequent keyword search on Google found the clip was originally published on December 1, 2015 on YouTube here by user hiramu55bocaboca, who regularly posts firework-related videos.

The caption, translated from Japanese to English, reads: “A new work in almost a year. Like the last work, I based it on a fantasy imagination, like ‘We held a major fireworks festival in winter at Lake Kawaguchi with full cooperation from Lake Kawaguchi Fisheries Association in order to celebrate Mt. Fuji’s recognition as a World Heritage site.’ So the background is Lake Kawaguchi. My ability as a director has not grown even compared with a year ago. But thanks to a wonderful tool developed by Mr. Anonymous, the quality of the bullets have improved immensely! Please feel the destruction force of critical bullets. Also, this time, I included reflections on the lake surface! Well, anyway, with up-tempo tunes, it really kills Mr. Fuji in the background, doesn’t it^^; Does it not seem like a good decision?” 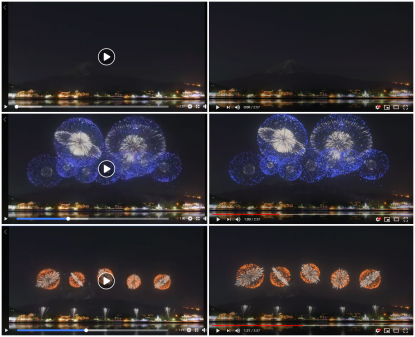 In response to the misleading posts, YouTube user hiramu55bocaboca told AFP by email on August 17, 2020: “It's not real fireworks.”

The user, who revealed his name is Hisashi Kinoshita, explained that he used a simulation software, FWsim, which “can design fireworks balls and combine them to design a fireworks show...The picture in the background can also be changed, so I used Mount Fuji in Japan as the background.”

Japan staged several firework displays across the country on June 1, 2020 “to cheer up the public, urge the gods to end the coronavirus pandemic and provide practice for struggling pyrotechnic artisans”, as reported by AFP here.