This video is of Algeria, and does not show Muslims attacking police in Denmark

A video shared thousands of times on Facebook and Twitter claims to show Muslims attacking police in Copenhagen. Although there was rioting in the Danish capital on April 15, 2019, the footage is actually from Algeria.

The video, shared here and here on Facebook, and here, here and here on Twitter, has racked up thousands of shares. The footage shows crowds attacking a police van and police officers in the street. Captions claim the people in the video are “Muslims in large hordes” or “Muslim thugs” attacking Danish police.

Below is a screenshot of the video posted on Twitter; the publication has since been deleted. 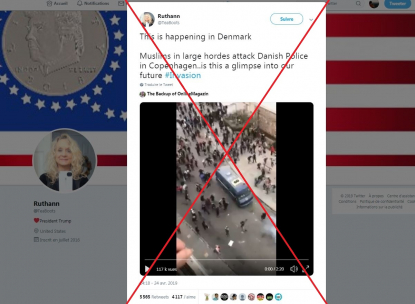 However, the video was actually filmed on Boulevard du Colonel Krim Belkacem in the Algerian capital, Algiers.

Several aspects of the video made us doubt it was taken in Copenhagen. Firstly, we can hear people shouting in Arabic. Secondly, the police van looks like a model used by Algerian police, seen in this photo below taken by AFP in Algiers on April 12, 2019. 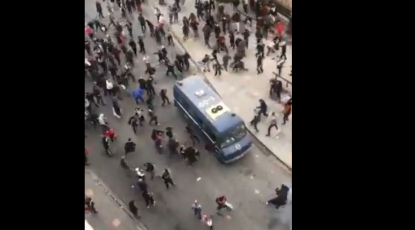 The video did not show up via reverse image searches, but comments on some of the posts claimed it was filmed in Algiers. We found this post in French which stated that the footage was taken on boulevard Krim Belkacem in Algiers on March 8, 2019.

A Google Maps search of the street revealed several similarities with the scene in the video, for example the high wall surrounded by buildings. 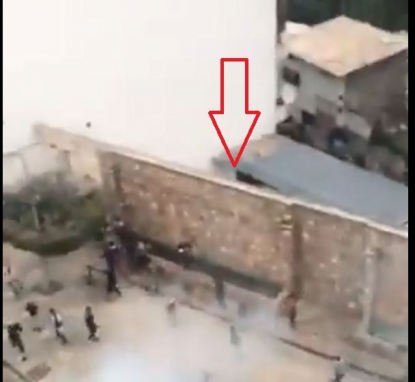 Furthermore, a video posted on Twitter shows a hotel, which we located to Boulevard Krim Belkacem on Google Street View. Hundreds of thousands of Algerians took to the streets after President Abdelaziz Bouteflika announced in February 2019 that he would stand for a fifth term. Demonstrations were mostly peaceful, but police fired tear gas at protesters who tried to force their way through a police cordon on March 8, 2019 in Algiers, AFP reported. President Bouteflika resigned on April 2, 2019, following weeks of protests.

Although this video is unrelated, rioting did break out in Copenhagen on April 15, 2019, when far-right activists led by the head of Denmark’s Hard Line party, Rasmus Paludan, tried to demonstrate in a mainly immigrant district, AFP reported.