This video actually shows a March 2020 fire in Singapore

A video has been viewed thousands of times in multiple posts on Facebook alongside claims it shows a fire at a public housing apartment in the Singaporean town of Clementi in June 2020. The claim is false; the video actually shows a fire that occurred in March 2020.

The one minute 28-second video shows black smoke billowing from an apartment building. 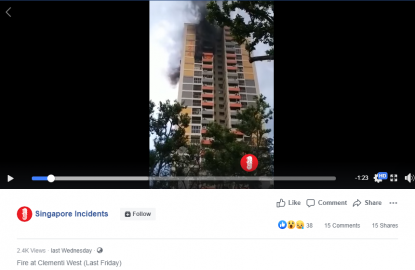 The video was also shared here on Facebook alongside a similar claim. Other posts, such as this, this, this and this, claim the video shows a fire in Ang Mo Kio, a town in northeastern Singapore.

A reverse Google Image search with keyframes extracted from the video in the misleading posts found an identical video published here on Facebook on March 16, 2020.

Below is a screenshot comparison of a keyframe from the video in the misleading post (L) and the Facebook video (R):

The video description states: “Around 40 people had to be evacuated temporarily from their homes on the afternoon of Mar 16, after a fire broke out in a flat in Clementi.”

The fire was also reported by Singaporean newspaper The Straits Times here.

“On 16 March 2020, at about 3.20pm, SCDF was alerted to a fire in a 19th floor unit at Block 724 Clementi West Street 2. The fire, which involved the contents of the living room of the unit was extinguished by SCDF firefighters using one water jet," an agency spokesperson said in an email on June 19.

The spokesperson added that "approximately 40 persons from the affected block were evacuated by SCDF and Police as a precautionary measure."

The street where the fire occurred can be seen here on Google Street View.