This video actually shows Islamic chanting in Bosnia and Herzegovina

A video has been viewed tens of thousands of times on multiple posts on Facebook alongside a claim that it shows Islamic invocations being chanted in Russia. The claim is false; the video has circulated online since 2018 in reports about Islamic invocations performed by a Malaysian Koran reciter in Bosnia and Herzegovina. 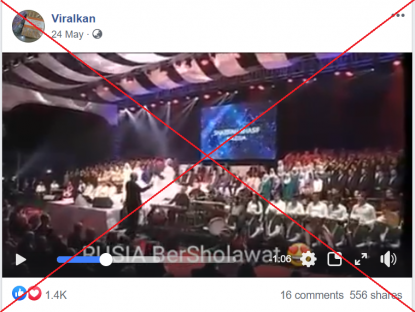 The Indonesian-language text superimposed on the footage translates to English as: “RUSSIA chants Islamic Invocations”.

The footage also circulated on Facebook in 2019, for example here, here, here and here.

A reverse image search followed by keyword searches on Google found this video uploaded by Malaysian-language daily Utusan Malaysia on its YouTube channel on March 26, 2018.

The Utusan Malaysia video is titled: “The greatness of Sharifah Khasif”.

“The 6-minute, 25-second video shows Sharifah Khasif chanting Selawat Rasulullah in front of more than 10,000 people and accompanied by two Sufi dancers from Turkey, as well as a group of background singers and accompanying musicians.”

The scenes in the misleading clip can be seen from the 2:22 mark in the Utusan Malaysia video.

Below is screenshot comparison between the clip in the misleading post (L) and Utusan Malaysia’s video (R): 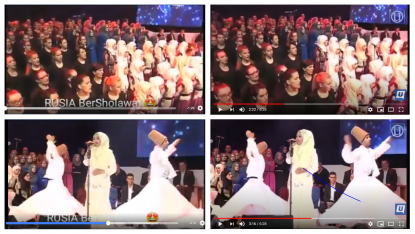 Sharifah also posted the same video here on her Facebook page on March 24, 2018.

The post reads: “I feel honoured to represent my country, Malaysia at the glorious International Quran and Qasidah nite in Bosnia & herzegovina with more than 10000 fans from all over the world , after 30 years of blood, sweat and tears....I'm grateful for all the privileges of what being an International Qariah bring my way , the opportunities to see the world, the camaraderie, friendship and more ....Definitely the best memory I will cherish and never forget ..Thank You for having me..❤️”.