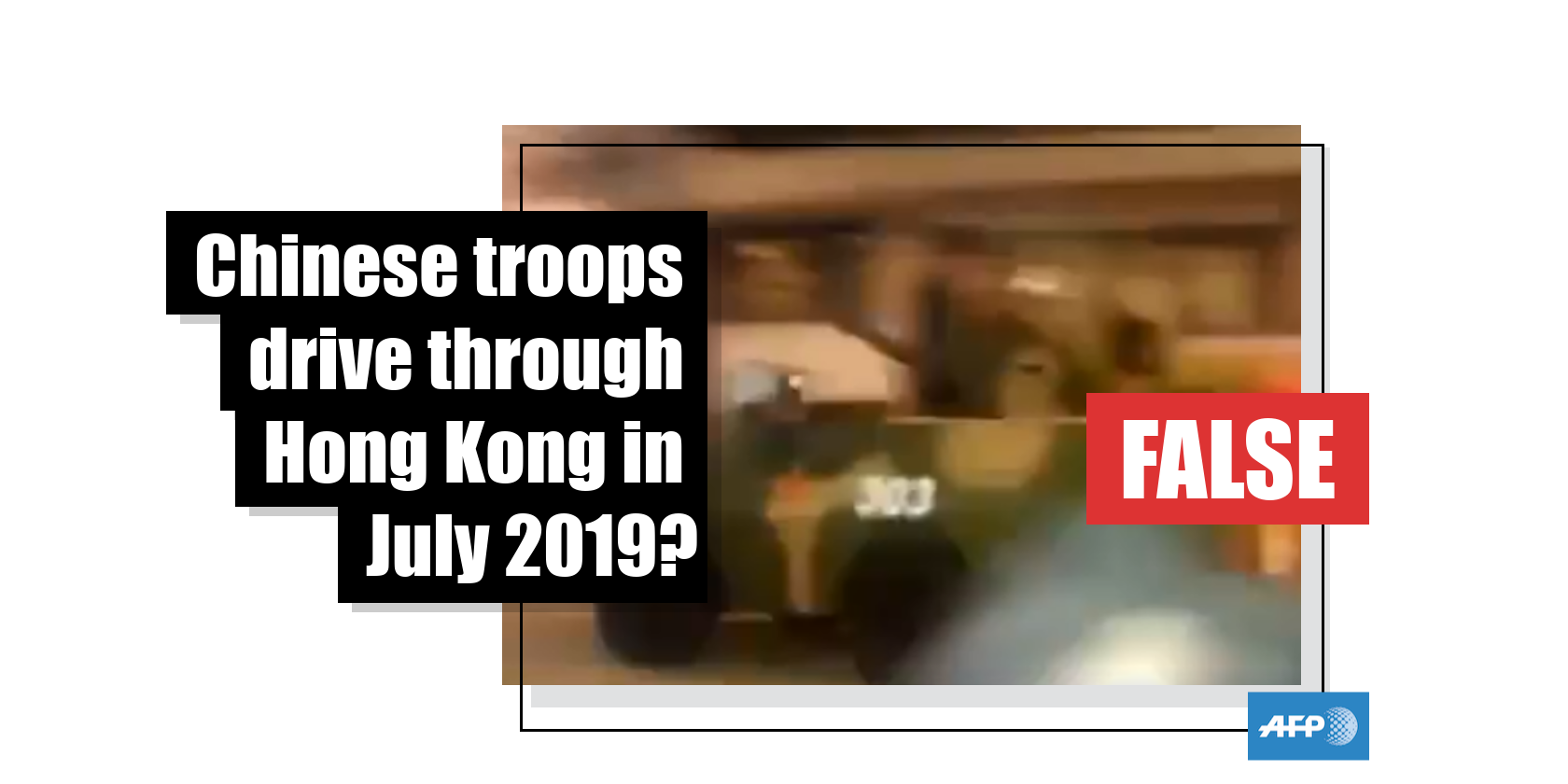 A video has been shared thousands of times in Facebook and Twitter posts that claim the footage shows China’s People’s Liberation Army (PLA) troops entering Hong Kong in July 2019. The claim is false; the video has circulated online since at least June 2012; according to local media, it shows PLA armoured vehicles coming to Hong Kong from mainland China as part of a “normal and necessary” troop rotation in June 2012.

The one minute, six seconds video was shared in this Twitter post on July 24, 2019, where it has been viewed more than 6,200 times. 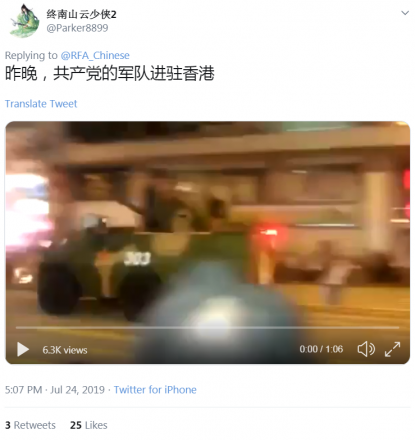 The tweet was posted on the same day that China’s defence ministry said that the PLA could be deployed in Hong Kong in order to maintain “public order” after weeks of protests. The PLA has maintained a garrison in Hong Kong since the former British colony was returned to China in 1997.

The same video was also published here and here on Facebook with a similar claim.

The claim is false; the video has circulated online since at least June 2012.

A longer version of the video was published here on YouTube on June 16, 2012. The video’s title states: “15/6/2012 Armored vehicles crossing Nathan Road”.

The caption states: “This video is uploaded via an Android phone.” The clip is embedded below.

The video in the misleading posts corresponds with the YouTube video from the seven seconds mark until the one minute 13 seconds mark.

Below are two screenshot comparisons of the video in the misleading posts (L) and the YouTube video (R):

The video was captured here at the junction of Nathan Road and Jordan Road in Hong Kong.

Hong Kong newspaper Apple Daily published this Chinese language report on June 16, 2012, which states that PLA vehicles were seen entering Hong Kong through the Lok Mau Interchange at Hong Kong’s border with Shenzhen in mainland China on the night of June 15, 2012.

This report about the same incident was published by Hong Kong newspaper Oriental Daily on June 16, 2012.

The report translates to English in part as: “More than 100 People's Liberation Army (PLA) vehicles arrived in Hong Kong at midnight yesterday. The military vehicles travelled along the Guangshen Expressway and entered Hong Kong via Lok Ma Chau, before heading towards the Shek Kong Barracks with police escort. The convoy (pictured) is formed by 90 communication vehicles, trucks and armoured vehicles, which were divided into three teams. The vehicles travelled orderly along the slow lane of San Tin Highway towards Pok Oi Interchange, then onto Castle Peak Road and Kam Tin Bypass, before reaching Shek Kong Barracks. The operation is believed to involve the rotation of personnel at the garrison.

"Stationing and rotation of military personnel and equipment, as well as military exercises, are a ‘normal and necessary part’ of the army’s operations," the PLA spokesperson said

“A PLA spokesperson told Oriental Daily that the operation was part of the army's internal affairs and refused to provide any further details. He/she added that the stationing and rotation of military personnel and equipment, as well as military exercises, are all part of the ‘normal and necessary part’ of the army’s operations. The spokesperson thanked the people of Hong Kong and media for their concerns about PLA affairs.”