US journalist Chris Wallace pictured in Italy, not on Epstein island

Posts with photographs of vacationing Fox News host Chris Wallace -- who moderated the first 2020 presidential debate -- claim the images show him with late sex offender Jeffrey Epstein on his infamous island. This is false; the photographs depict Wallace when he was in Italy with actor George Clooney in 2012.

“Chris Wallace with Epstein. Now are you awake. ?” reads an October 1, 2020 Facebook post shared 1,300 times. In the photo, Wallace appears to walk along a pier with two women and a man. 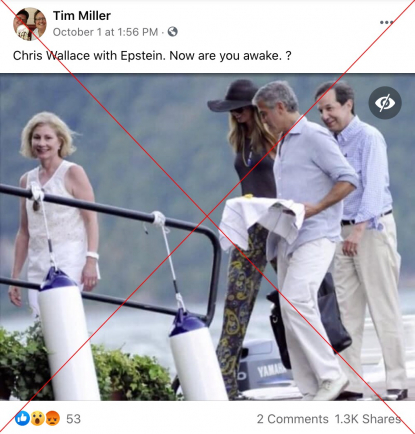 More examples of the claim are available on Twitter here, and in Spanish here and here.

In a second photo used in a similar claim, a man helps Wallace climb onto a boat. That version of the post is found on Facebook here and here and on Twitter here. 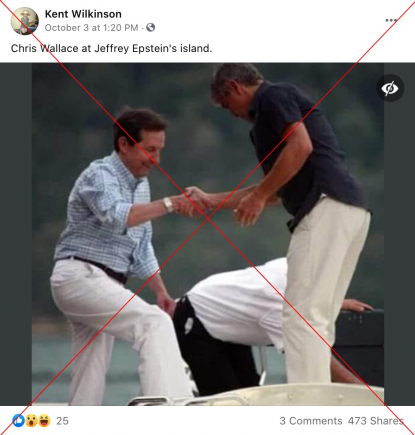 However, neither photo shows Wallace with Epstein, who owns two private islands in the US Virgin Islands and was accused in July 2019 of abusing minors. Epstein died by suicide in a New York jail later that year while awaiting trial on charges that he trafficked and sexually abused dozens of girls as young as 14 between 2002 and 2005.

A reverse image search of the picture with four people, with results limited to before 2019 when Epstein was arrested, yields an August 2012 Politico video where Wallace describes the vacation, a four-day getaway at George Clooney’s home in Lake Como, Italy.

“I was fortunate enough to be invited -- Lorraine and I, my wife -- to spend a few days with him at his home in Lake Como,” Wallace told then-Politico reporter Patrick Gavin in the video.

Another 2012 clip, from Fox News where Wallace works as an anchor, also refers to the star-studded vacation. Wallace mentions that the women on the trip were Lorraine Martin Smothers, his wife, and Stacy Keibler, an American actress and Clooney’s girlfriend at the time.

UK outlet Daily Mail also published an article about the trip with these details and several photos, including the image of the four on a pier.

Trump supporters and Trump himself -- who did most of the interrupting -- have accused Wallace of going too hard on the president and too easy on Biden during the debate.

"I guess I'm debating you, not him, but I'm not surprised," Trump said to Wallace at one point.

The Virgin Islands government filed a lawsuit against Epstein’s estate, which says he and his associates acquired Little St James island in 1998.

Lake Como, Italy is more than 4,000 miles away from Little St James.