As deadly conflict raged between federal Ethiopian forces and the Tigray People’s Liberation Front (TPLF) in November, Facebook posts claimed the US had declared the dissident group from the country’s northern region a terrorist entity. Although the TPLF was once deemed a “Tier III Terrorist Organization” by the US State Department, this designation was lifted in 1991 and it currently does not feature on the official US list of terrorist groups.

“The United States Department of State has issued a statement denouncing the TPLF as a terrorist in East Africa (sic),” claims a Facebook post in Amharic shared more than 3,000 times since November 20, 2020. “This is a big headache for the TPLF. Going forward, the world will intensify its monitoring on this terrorist group.”

The post includes images of US Secretary of State Michael Pompeo and TPLF frontmen Debretsion Gebremichael and Seyoum Mesfin. 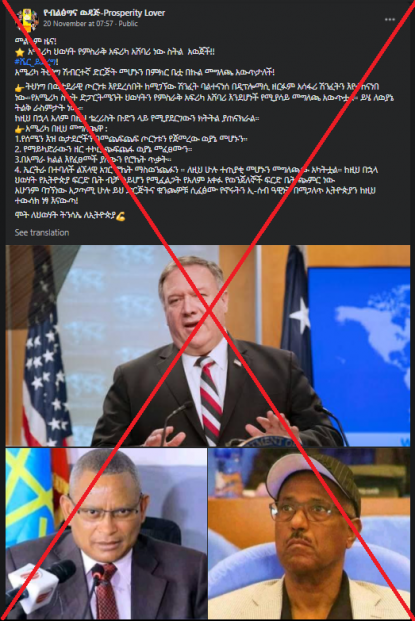 Fighting in Ethiopia’s northern Tigray region, rooted in long-running tensions between local leaders and authorities in the capital Addis Ababa, flared when Tigray held its own elections in September, defying a nationwide ban on polls because of the coronavirus pandemic.

Tensions escalated dramatically when Ethiopian Prime Minister Abiy Ahmed ordered his military into Tigray last month after he said the TPLF launched a bloody attack on a federal army camp. The TPLF has denied this.

The conflict has claimed thousands of lives and forced tens of thousands of refugees across the border into Sudan.

The US has repeatedly expressed concerns about the ongoing conflict in Ethiopia.

On November 17, 2020, Pompeo said in a statement that the US “strongly condemns” recent TPLF attacks, including rocket strikes last month which appeared to target an airport in neighbouring Eritrea, accused by Tigray of backing Ethiopia.

We strongly condemn the attack by the Tigray People’s Liberation Front against Eritrea and the attempt to internationalize the conflict. We urge the TPLF and the Ethiopian authorities to take immediate steps to de-escalate the conflict, restore peace, and protect civilians.

While the US Department of State has issued various statements on the crisis (including here and here), it has not publicly declared the TPLF a “terrorist organization”.

Furthermore, the TPLF does not feature on the Department of State’s list of “designated foreign terrorist organizations”.

However, the TPLF was deemed by the US to be a “Tier III terrorist organization” until 1991, the year that it toppled autocrat Mengistu Hailemariam and became part of the ruling coalition of Ethiopia, according to a statement from the US Citizenship and Immigration Services (USCIS) sent to AFP Fact Check.

As opposed to Tier I and Tier II Terrorist Organizations which undergo a formal designation process, groups in Tier III are known as “undesignated terrorist organizations”. They involve “a group of two or more individuals, whether organized or not, which engages in, or has a subgroup which engages in terrorist activity”.

However, since the US definition of “terrorism-related activity” is broad -- typically including rebel groups fighting against an authoritarian regime -- some organisations, such as the TPLF, are exempt from immigration restrictions usually imposed on members of such groups.

In 2014, the US said that people who were involved with the TPLF after May 1991, when it was no longer classed as a Tier III Terrorist Organization, may not require this special exemption.

“Implementation of the TPLF exemption is to be examined by USCIS on a case by case basis under the totality of the circumstances,” it said.