A screenshot of a US Senate memorandum has circulated in social media posts that claim the US government declared former US President Barack Obama a “funder of Al-Qaeda”. The claim is false: the memorandum states a US Senate investigation determined that World Vision, a US-government funded charity, bore "sole responsibility" for partnering with the Islamic Relief Agency (ISRA), a group that had been sanctioned by the US for funding extremist groups.

The screenshot was shared on Twitter here on January 16, 2021.

The Chinese tweet translates to English as: “The United States officially states: Obama is a funder of Al-Qaeda". 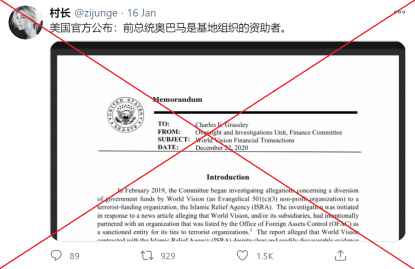 The tweet includes a screenshot of a memorandum titled “World Vision Financial Transactions” from the US Senate's Committee on Finance dated December 22, 2020.

The image was also shared alongside a similar claim here, here and here on Twitter, and here on Facebook.

The Senate document, seen on the Committee's website here, states that World Vision, a US-government funded evangelical charity, was at fault for partnering with and paying the Islamic Relief Agency (ISRA), a group sanctioned by the US for funding extremist groups.

At no point does the document state Obama has been declared a sponsor of Al-Qaeda, or is at fault for World Vision's mishandling of taxpayer money.

According to the memorandum, World Vision partnered with ISRA after receiving a government grant in 2014 to carry out humanitarian work in Sudan. It was only later that World Vision discovered the group was subject to US sanctions, the Senate's document states.

The charity wrote to the US Treasury “requesting clarification of ISRA’s status” and asking for “a temporary license to complete the existing contract with ISRA” even if it turned out the group was subject to sanctions, the document continues.

In 2015, the Obama administration approved World Vision's 125,000 USD payment to ISRA after the charity “stressed that it could face severe legal consequences and even expulsion from Sudan if it did not pay ISRA the monies owed”.

The Senate, however, found that World Vision was at fault for US government funds being paid to ISRA.

"World Vision bears the sole responsibility for their failure to properly vet ISRA," the memorandum states. "World Vision has a duty to ensure that funds acquired from the U.S. government or donated by Americans do not end up supporting terrorist activity."

The Senate also criticised World Vision for attempting to "shift the blame to the federal government for their own inability to properly vet a subcontractor."