A photo of South Korean President Moon Jae-in sitting in front of a teleprompter while holding a press conference has been shared repeatedly on Facebook in January 2021 alongside a claim it shows he was reading from a script. The claim is misleading: the image has been doctored from a photo that was taken in January 2020. South Korea’s Presidential Blue House told AFP that the prompters were used to display questions from journalists to the president. 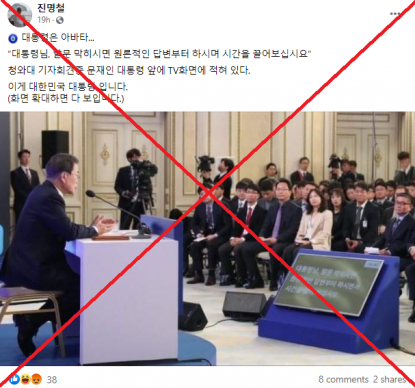 The post’s Korean-language text translates to English as: “The President is an avatar.

“‘Mr President. If you do not know what to answer, please try rehashing basics to buy time.’

“Such a message is clearly written on the screen in front of President Moon Jae-in during a Blue House [South Korean Presidential Office] press conference.

“This is our President. We all can see when enlarging the photo.”

"Avatar" is a term that suggests a person or character is being manipulated or controlled by someone else."

The claim was shared alongside a photo that shows Moon sitting in front of a teleprompter at a press conference.

The Korean-language text on the prompter reads: “Mr President. If you do not know what to answer, please try rehashing basics to buy time.”

The photo is captioned: “President Moon Jae-in is answering questions from journalists at the Blue House on the 14th during a 2020 New Year Press Conference.”

The Korean-language text on the prompter in the original photo reads: “Bae Hae-soo, a journalist from OBS. What is the concrete goal with policies designed to stabilise the real estate market? What are your thoughts on holding tax?"

Below is a screenshot comparison of the image in the misleading posts(L) and the photo taken by Yonhap News Agency (R) :

In response to the misleading posts, Yonhap News Agency said in a statement on January 21, 2021 that the image had been manipulated.

“The prompter carried the questions asked by reporters at the time.

“If you have shared this manipulated photo, please delete it immediately, and please be careful not to spread them.”

In response to the misleading posts, a spokesperson at the Presidential Blue House told AFP that the photo had been doctored.

“The prompters were there to show the President questions from the journalists,” the spokesperson said during a phone interview on January 20, 2021.

Recorded footage of the 2020 New Year press conference, published here on the official Youtube channel of KTV on January 14, 2020, shows two prompters in front of Moon. Korean-language text can be seen appearing on them as journalists speak.

The scene where a journalist from OBS asking a question begins at the video’s 49-minute and 3-second mark. 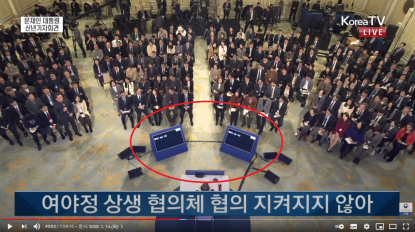 Screenshot of a recorded footage of the 2020 New Year press conference. Prompters circled in red by AFP. Captured on January 22, 2021

A close analysis of the footage found that at no point did it show teleprompters displaying scripted responses for Moon, as claimed in the misleading posts.