A purported alert from the United Nations about the killing of migrant workers in the Middle East for organ harvesting has been shared on Facebook and Twitter hundreds of times. The posts also warns people about fake agencies who offer employment abroad but kill the victims and remove their organs. The claim is false: the purported alert is fabricated and the UN denied ever issuing any such alert.

The purported alert was published on Facebook here on March 2, 2021.

The supposed alert, which features the UN's logo, reads:

"The black market for parts of the human body is booming in the Middle East. A kidney now costs 262,000 dollars (131 million CFA francs); the heart costs 119,000 dollars(60 million CFA francs) and the liver costs 157,000 dollars (79 million CFA francs). Beware of fake foreign agencies promising to make you work abroad. They process your papers, pay your plane ticket and just take you abroad pretending they want to find you a job, but instead, they kill their victims, recover all the precious parts of their bodies. Many people have been offered jobs in the Middle East and so far their families have been unable to locate them. SHARE TO SAVE LIVES However, the claim is false. The purported alert is fabricated and the UN denied it issued any such alert.

The link to a UNODC (United Nations Office on Drugs and Crime) webpage given at the end of the fake alert shows an error page and doesn’t show any alert about organ trafficking.

Below is a screenshot of the error page linked from the UNODC webpage address:

A screenshot taken on March 10, 2021, of the webpage address leading to an error message on UNODC website.

An archived version of the UNODC webpage, seen here, shows a brief about organ trafficking and the response of the Working Group on Trafficking in Persons established in 2011.

Below is a screenshot of the archived webpage of UNODC: 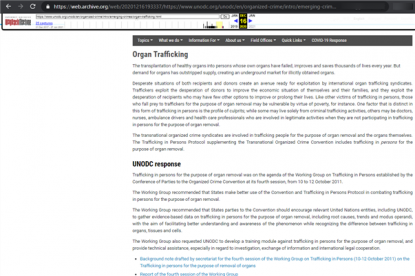 A screenshot taken on March 10, of the archived webpage of UNODC

UNODC Pakistan confirmed that the purported alert is fake, telling AFP that the message "does not originate from UNODC and contains out-of-date information that is not related to current UNODC activities”.

Further keyword searches found that the fake alert also circulated in 2019 with false attribution to Ikechukwu Attah, an official of the International Organisation for Migration (IOM) in Nigeria. The statement was published in this report by Turkey’s Anadolu Agency and this report by Nigeria’s online news portal Independent.

However, Attah told BBC Pidgin here that he was shocked to see Nigerian journalists quoted him as purportedly making the statement.

“No news spreads faster than fake news. The latest is that the news making rounds that the International Organization for Migration had warned Nigerians to stay vigilant and be careful of numerous fake travel agencies in the country, is fake news,” the BBC Pidgin report reads.

“BBC Pidgin confirmed this after a discussion with Ikechukwu Attah, the National Protocol Officer of IOM in Nigeria. Attah expressed shock that Nigerian journalists quoted him as purportedly making the statement.

“Reports in many daily newspapers, as well as on social media, claimed that IOM had released a statement regarding unscrupulous people recruiting Nigerians thorough fake foreign  travel agencies with promises to provide them with better jobs, and from that exposing them to danger, including harvesting their organs.”

“The information from April 2019 quoting IOM Nigeria belongs to an online news article that was circulated via WhatsApp, and was wrongly attributed to IOM,” Galindo told AFP in an email on March 10, 2021.