Skip to main content
Staffers guide a voter at a polling station in Aalborg during the parliamentary elections 2019, on June 5, 2019. (Photo by René Schütze AFP)

Multiple Facebook posts have shared a text graphic alongside a claim that Denmark has passed a new law that prohibits Muslims from voting in the elections. The claim is false; Denmark has not passed such a law and the country’s parliamentary website shows all permitted Danish citizens above 18 are entitled to vote.

The text graphic was shared in this Facebook post on November 3, 2020. It has been shared more than 1,400 times.

The Hindi text reads: “Denmark has passed a law abolishing the voting rights given to Muslims in the country. This is how it is done; this is what we demand.” 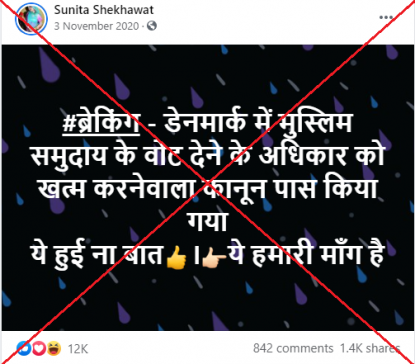 Similar claims were published here, here and here on Facebook.

The claim, however, is false. No credible evidence shows Denmark has passed such a law, and in fact all permitted Danish citizens above 18 are entitled to vote in the country.

Denmark’s Parliamentary website states that “Danish citizens who have permanent residence in Denmark, Greenland or the Faroe Islands and are at least 18 years of age, the voting age in Denmark, are entitled to vote.”

A screenshot of Denmark’s Parliamentary website, taken on March 11, 2021

The Danish Ministry of Social Affairs highlights the same rules of voting.

Denmark’s Parliamentary Elections Act Chapter 1 on General Elections and Referendums Part 1 here further elaborates on the eligibility of voting, it nowhere mentions that Muslims in the country have been banned from voting.