An article claiming Uganda’s President Yoweri Museveni has postponed next year’s general election to 2023 because of the global spread of the new coronavirus has been shared thousands of times in multiple Facebook posts. The claim is false; an electoral commission official issued a flat denial, labelling the claim “nonsensical”.

A post on this Kenyan Facebook group with more than two million followers shared a link to the article alongside this text: “President Museveni has postponed next Years Election to 2023 Due to CORONAVIRUS. We cannot Risk the life of millions of people of Uganda we will have our elections in 2023 - Museveni (sic)”.

According to the article, the Ugandan leader made the announcement during a press conference at his official residence. 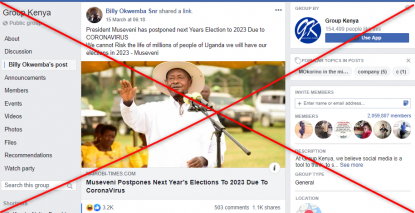 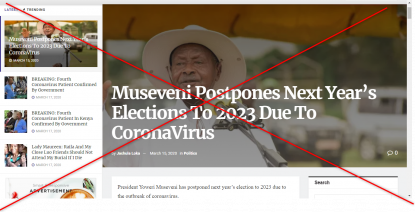 Screenshot of the misleading article, taken on March 18, 2020

Some online users appeared to believe the claims, commenting that it could be a ploy by Museveni -- who has ruled since 1986 -- to extend his term. He has already been endorsed by the ruling National Resistance Movement (NRM) for re-election.

However, Museveni has made no such declaration.

Don Wanyama, Museveni’s press adviser, told AFP via phone that “the president does not have powers to postpone elections”.

“That is silly, obviously. It is fake news,” Wanyama said in dismissing the claims.

Uganda holds its general election every five years and according to electoral laws, a presidential election may be suspended in the event of war or a state of emergency. The law allows parliament to reschedule the date for the election.

Uganda's constitution gives the president the powers to declare a state of emergency. 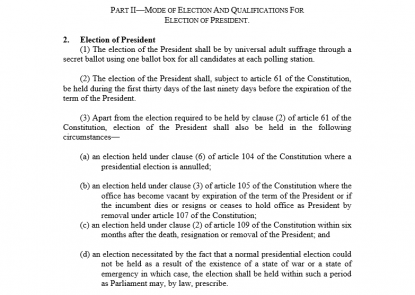 A screenshot of Uganda's Presidential Elections ACT, taken on March 18, 2020

The claim coincides with a petition filed in a Ugandan court by Abey Mgugu, a citizen who is pleading with the state to postpone next year’s polls because of fears associated with the novel coronavirus, local media reports here. No response has been forthcoming from the government yet. Uganda has not reported any case of coronavirus and no official communication has been issued regarding next year’s election.

However, the president is set to address the nation regarding the coronavirus pandemic during the afternoon of Wednesday 18 March, 2020.

Jotham Taremwa, Electoral Commission spokesman, told AFP that the claims should be ignored, stating: “That is nonsense.”

When asked whether the president has the power to postpone elections or what the process for such an event would be, he said: “I don't want to give any credit to discussing these false stories. Why should I? It is false.”

Museveni, 75, got the clearance to run for the presidential seat after a bill that scrapped the presidential age limit of 75 was signed into law. This move by Uganda’s parliament sparked demonstrations and an outcry from the opposition which accused the president of seeking to rule for life. Read AFP’s report here.