Photos of letters from Hong Kong schools announcing the deaths of two students have been shared repeatedly in multiple Facebook and Twitter posts which claim the students were "beaten to death" at a subway station in Kowloon on August 31, 2019. The claim is false; staff at the two schools told AFP that the student deaths were not related to events at Prince Edward subway station on August 31; one of the students died before the incident; the Hong Kong government, Hong Kong police; the Hospital Authority, and Hong Kong's rail operator MTR have all separately stated there were no fatalities during the police arrests at the subway station.

The images of the two letters were published such as here on Facebook on September 3, 2019.

“(By now) Two brave young students have been proved to be beaten to death during the 831 terrorism attack by Hong Kong’s terrorism group members - communist party members, gangsters and police officers. They bravely sacrificed. The beast-like communist party authority in Hong Kong led by Carrie Lam can’t wash their hands white as new bloody debt has been added. ” 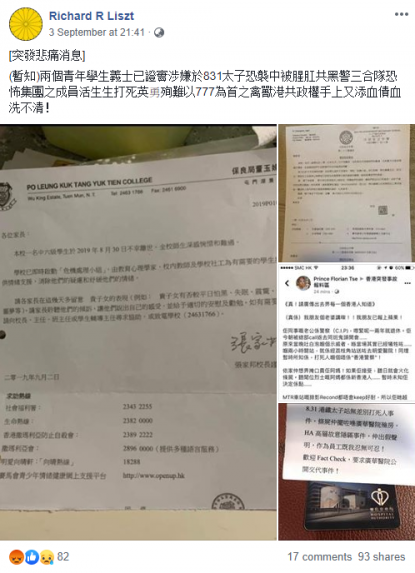 The letter from Sha Tin Government Secondary School, written in traditional Chinese language, is dated September 3, 2019. It states in part: “A Secondary 2 student of our school unfortunately passed away on September 2, 2019.”

The letter from Po Leung Kuk Tang Yuk Tien College, also written in traditional Chinese language, is dated September 2, 2019. It states in part: “A Secondary 6 student of our school unfortunately passed away on August 30, 2019.”

Pro-democracy protesters have staged weeks of rallies in Hong Kong that have often descended into violent clashes with police. Police said they arrested protesters at two of the city’s railway stations on August 31, according to this AFP report.

Multiple social media posts after the incident, for example here, have speculated that people had died during the arrests, and white flowers and graffiti have been left outside the MTR station.

The claim is false; staff at the two schools cited in the letters told AFP that the student deaths were not related to the subway station arrests.

Teresa Tang, assistant principal of Sha Tin Government Secondary School told AFP by phone on September 9, 2019 that the announcement was “indeed issued by their school”.

“The student’s death is not related to the Prince Edward Station”, she told AFP.

A spokesperson for Po Leung Kuk Tang Yuk Tien College told AFP by email that the second picture from the misleading post was an official announcement by the school.

He confirmed the student passed away before the Prince Edward Station incident.

The Hong Kong government has denied that anyone died due to the arrests on August 31.

In this statement issued on September 7, a spokesperson said there had been “no death resulting from enforcement actions in the last three months.”

In this press conference on September 5, the Hong Kong Police Force also refuted claims that protesters were killed during an arrest operation in Prince Edward station on August 31, which can be seen at 19:18 of the footage.

The MTR Corporation also said there was no record of anyone dying at the station on August 31.

In an email to AFP on September 6, a spokesperson said: “We understand concerns about Prince Edward Station. According to station records, there was no record about anyone passing away in the station in the evening of 31 August 2019.”

The MTR Corporation released still images from their CCTV footage of the August 31 incident, which have been shared widely on social media, for example here.

#BREAKING: The #MTR has just released images from its CCTV footage over the police’s enforcement action at Prince Edward station on 831, in an attempt to dismiss rumours that three people died in the station. The govt will also hold a pc shortly to explain the matter pic.twitter.com/9E9xJO6Vfa

The Hospital Authority also said it did not record any deaths from those who were admitted to hospital between 31 August and September 1 after the protests.

In an email to AFP on September 6, 2019, the hospital said in an English-language statement: “As at 6th September 2019, there are 46 patients treated by public hospitals during the mass gathering activity between 31 August and 1 September and there was no deceased case.”

The misleading claims about the announcement by Sha Tin Government Secondary School was also debunked by Hong Kong’s local media such as here by TOPick under HKET, here by HK01, and here by fact check Facebook page Kauyim Media.