US President Donald Trump’s campaign claimed on social media that Democratic candidate Joe Biden mangled the Pledge of Allegiance, posting a video as evidence. This is false; Biden was not reciting the pledge in the clip, but rather making the point that he would seek to serve both his opponents and supporters if he is elected president.

“Joe Biden completely botches the Pledge of Allegiance: ‘I pledge allegiance to the United States of America, one nation, indivisible, under God, for real,’” Trump’s campaign posted on its official Facebook page on September 22, 2020, along with a video of Biden. 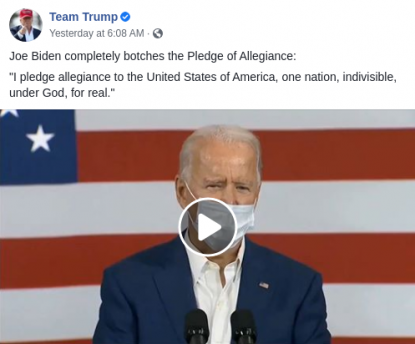 The same claim was also made on Facebook by prominent conservatives Dinesh D’Souza and Sean Hannity, as well as by Trump’s campaign on Instagram and Republican Party Rapid Response Director Steve Guest on Twitter.

Trump has sought to portray Biden as sleepy and generally mentally unfit to hold the office of US president, and his alleged inability to say the Pledge of Allegiance fits into that narrative.

The implication resonated with people who commented on the posts, with one saying: “How can people think he is mentally capable of running our country,” and another writing: “He can be the president of the assisted living facility.”

The pledge, which some students recite at the beginning of school, says: “I pledge allegiance to the flag of the United States of America and to the republic for which it stands, one nation, under God, indivisible, with liberty and justice for all.”

The clip spread by the Trump campaign comes from remarks by Biden on September 21 in Manitowoc, Wisconsin. The full version of his speech makes clear that he was not attempting to recite the pledge verbatim.

Rather, he was criticizing Trump for saying that US coronavirus numbers would be “at a very low level” if Democrat-led states were excluded.

According to Biden, Trump is “saying if you live in a state like Wisconsin, Michigan, Pennsylvania, states with Democratic governors, you’re not his problem -- he has no obligation, he’s not responsible for you as president, your family, or your well-being. I don’t see the presidency that way.”

In addition to the Trump campaign's false claim about the clip of Biden in Wisconsin, the president and his team have openly spread digitally altered images during the 2020 race.

AFP Fact check has previously debunked manipulated videos of Biden that Trump has spread on social media, as well as an ad from his campaign that featured doctored images of his Democratic rival.