US President Donald Trump claimed on Twitter that his Democratic rival Joe Biden referred to young Black men as “super predators.” This is false; it was Hillary Clinton, not Biden, who used the phrase in the 1990s when she was speaking about gangs.

“Joe Biden constantly used the term “Super Predator” when referring to young Black Men, according to my sources,” Trump tweeted on November 1, 2020, after previously writing that “Joe Biden called Black Youth SUPER PREDATORS. They will NEVER like him, or vote for him. They are voting for ‘TRUMP’.” 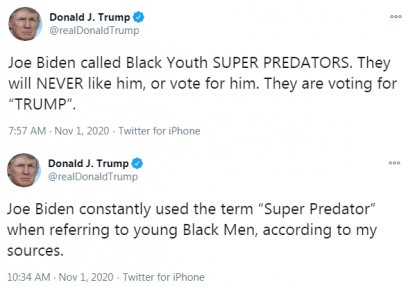 Screenshots of tweets by US President Donald Trump, taken on November 2, 2020

Trump -- who has fought to cut into Biden’s support among Black Americans -- made the same claim in the final 2020 presidential debate on October 22.

But it was Hillary Clinton who used the phrase when speaking in New Hampshire in January 1996 about the need to confront gangs.

“We need to take these people on. They are often connected to big drug cartels. They are not just gangs of kids anymore. They are often the kinds of kids that are called super predators -- no conscience, no empathy,” Clinton said.

Biden did however use the term “predators” during a 1993 Senate speech, the day before a vote on a crime bill.

“Madam president, we have predators on our streets, that society has, in fact, in part because of its neglect, created.” Biden said.