A screenshot shared more than 150 times on Facebook claims to show a tweet from US President Donald Trump congratulating Ethiopian Prime Minister Abiy Ahmed shortly after he won the Nobel Peace Prize. However, there is no record of Trump posting such a tweet and the image appears to have been doctored.

The screenshot, shared here and here (archived posts), purports to show Trump congratulating his Ethiopian counterpart on his "brave leadership in Ethiopia". 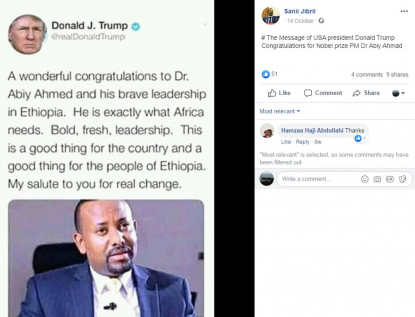 One post was shared shortly after Abiy won the Prize on October 11, and another after he collected the award in Oslo on December 10.

The Nobel committee honoured Abiy -- Africa's youngest leader at 43 -- for progress in the months after he took power in April 2018, including formally ending a stalement with Eritrea and pushing to introduce democratic elections in a country long ruled by authoritarian governments.

AFP ran a Google reverse image search on screenshot shared on Facebook and found an earlier share of the post in June 2018, long before Ahmed won the Nobel Peace Prize.

However, an advanced search on Twitter found no trace of the tweet on Donald Trump's official account. We also searched keywords from the screenshot in The Trump Archive, a tool that saves all tweets from Trump's account -- even ones that have been deleted.

Although Trump has tweeted about Ethiopia in the past, there was no record of a tweet congratulating Abiy Ahmed.

Screenshot of search results from the Trump Twitter Archive, taken on December 12, 2019

AFP has previously debunked fake Trump tweets relating to Ethiopia. You can read our fact-checks here and here.