Posts on Facebook, Twitter, WhatsApp and multiple blogs in Nigeria claim that the Trump administration has placed a ban on visas for Nigerians seeking to study in the United States. This is false; the US embassy in Abuja has called on Nigerians to disregard the claim, which it described as “fake news”.

The posts have been shared thousands of times on Facebook. One article, published on the site Double A Media, was shared at least 1,700 times according to data from the social media analysis tool CrowdTangle, including by a popular Nigerian pastor. We've archived that post here. 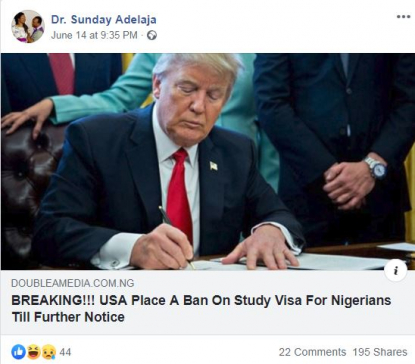 A screenshot taken June 18, 2019, showing a Facebook post claiming Trump has placed a ban on study visas for Nigerians

The same message has travelled among numerous WhatsApp groups in Nigeria, especially groups focused on scholarships and international education. The number of shares on WhatsApp cannot be traced due to the end-to-end encryption available on the instant messaging app.

The claim was also posted on some of Nigeria's most popular blogs and message boards -- we've archived some of the posts here, here, and here. The story was also posted on Nairaland, the country's most-visited homegrown social network, but it was taken down after the claim was found to be false. Information Nigeria, an online newspaper, also deleted its initial post reporting the claim.

The earliest version of the story, which was published on the website The 247ureports and which we've archived here, claims that US authorities had "effectively halted issuing student visas to students coming from Nigeria until further notice".

President Donald Trump has been shaking up US immigration policies since he came into office in 2017 -- including, in Nigeria, an indefinite suspension of interview waivers for renewals, otherwise known as the “Dropbox” process. This change came into force on May 14, 2019.

The US administration has, however, not placed a ban on student visas as claimed by the misleading posts. Sterling Tilley, acting information officer of the US embassy in Abuja, told AFP via email that “the reports in question are inaccurate”.

“The requirements to qualify for a student visa have not changed for Nigerians or for applicants of any other nationality,” he said.

The US Embassy in Abuja also tweeted on June 17, 2019 to say the posts were “false” and “manufactured”.

#FakeNews Alert! Be advised, reports of Student Visa ban for Nigerians is false. If you have seen such manufactured item on Facebook and Twitter or received it via WhatsApp, please communicate that it is false. pic.twitter.com/1EvoiST6ak