Skip to main content
A dog groomer trims the fur of a paw of a dog at a specialised pet shop in Bangkok on August 18, 2019. (ANTONOV / AFP)

A screenshot of a tweet purportedly asking dog owners to avoid saying “good boy” or “good girl” to their pets because it “delegitimises the lived experience of transdogs” has been shared thousands of times on Facebook. The remarks prompted anger from social media users. However, the tweet was posted by a parody account run by Northern Irish comedian Andrew Doyle intended to satirise “woke” culture.

The claims were shared by a New Zealand-based Facebook user here on March 6, 2021. 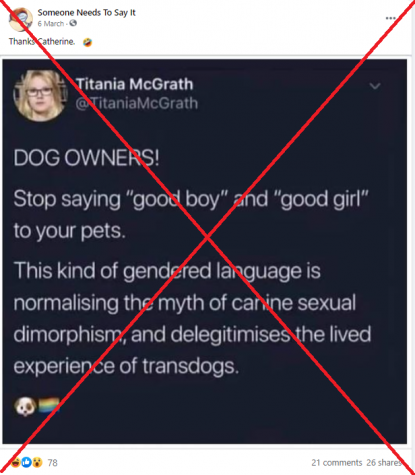 “Stop saying 'good boy' and 'good girl' to your pets. This kind of gendered language is normalising the myth of canine sexual dimorphism, and delegitimises the lived experience of transdogs.”

The screenshot of the tweet has been shared thousands of times by users from around the world here, here, here and here.

While most social media users pointed out the tweet was a joke, a considerable amount appeared to be misled and reacted angrily.

"Is she serious?? I will ALWAYS say good boy or girl to my pets," one Facebook user commented.

"I am totally feed up (sic) about what I can say if you want to (be) transgender go for it but I don't want to go on your journey," another wrote. 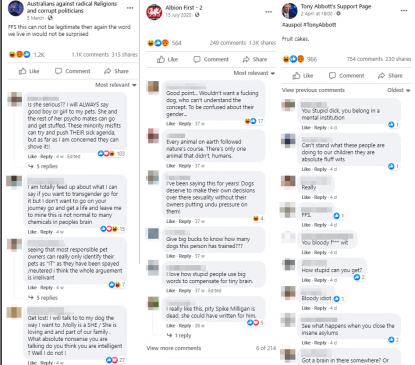 Titania Mcgrath, is a fictional character whose Twitter profile was created by comedian and columnist Andrew Doyle, who explains the character in this interview uploaded to YouTube.

During the interview, Doyle explains that he created Titania McGrath in April 2019 with the character intended to satirise the “excesses of the social justice movement”.

“I wanted to do this sort of slam poet, very pretentious, young, very narcissistic, kind of very privileged person who wants to nevertheless say they are oppressed,” he said in the February 2020 interview.

The bio of the Twitter account states the fictional character is an “Activist. Healer. Radical intersectionalist poet. Nonwhite. Ecosexual” and links to this satirical book written under the McGrath pseudonym -- actually authored by Doyle.

Doyle even created a comedy show featuring Titania, played by Alice Marshall, that debuted at the Edinburgh Festival in 2019. You can see a video of the set uploaded to YouTube here.