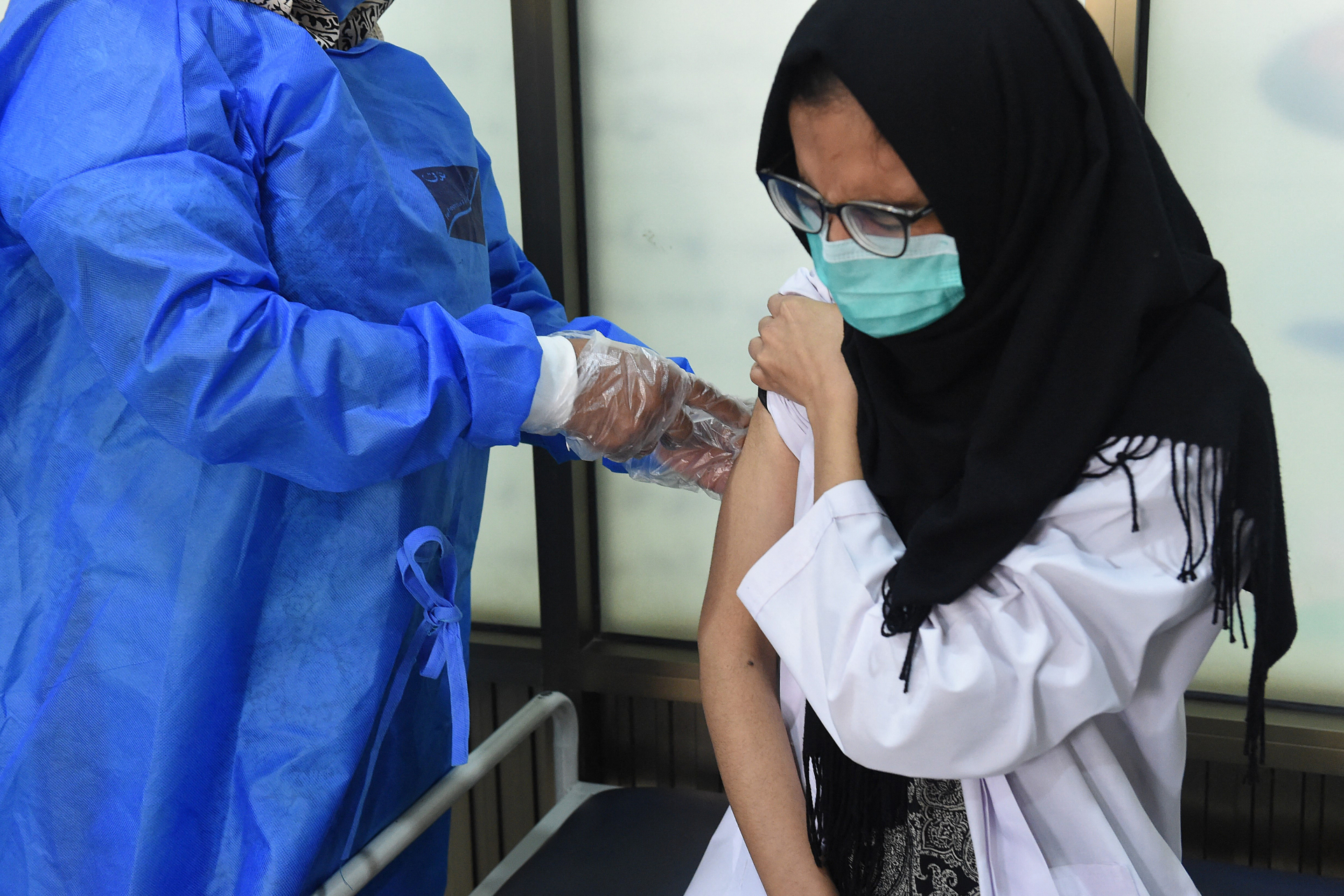 A doctor receives a dose of the Chinese-made Sinopharm vaccine against the Covid-19 coronavirus, at a vaccination centre in Quetta on April 6, 2021. (Photo by Banaras KHAN / AFP) (AFP / Banaras Khan)

A video has been shared tens of thousands of times by Pakistani Facebook users that claims Italian doctors discovered Covid-19 is caused by a bacteria. The video goes on to claim the bacteria is somehow spread through the "poisonous waves of 5G", causing an infection that is curable by taking paracetamol or aspirin. These claims are false, according to international health experts. Italy’s health ministry previously told AFP the claims were a “hoax" after they circulated online in the Philippines.

It has been shared more than 60,000 times. “Italy is the first country to do a postmortem on a person who died of corona”, the post’s Urdu-language caption reads.

Screenshot of the video making the false claims. Taken on April 8, 2021.

The video purports to show a genuine news report. In the clip, a woman can be heard speaking over various images used to illustrate the pandemic.

"This is no virus, rather just a bacteria that uses 5G” and “those who suffer from it should use aspirin 100 milligram and paracetamol 650mg”, she says in Urdu.

"People are dying globally because of poisonous waves of 5G," she says.

The video goes on to falsely claim that doctors in Italy made these discoveries after “disobeying” directives from the World Health Organization (WHO) to conduct post-mortems on Covid-19 victims.

The video was originally posted here on YouTube on January 7, 2021 alongside a similar claim.

The video’s caption is written in an English transliteration of Urdu and reads: “Postmortem of a corona patient. The truth of #CORONA is revealed”. 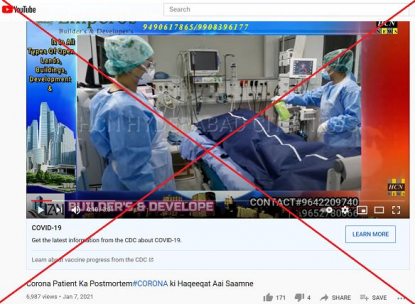 The claims, which have previously circulated online in other languages, are false.

AFP previously debunked a similar claim after it circulated online in the Philippines in June.

At the time, a spokeswoman for the Italian health ministry told AFP that the claims about Italian doctors were “a hoax”.

Covid-19 is caused by a virus, not bacteria or 5G, according to the WHO.

"The coronavirus disease (COVID-19) is caused by a virus, NOT by bacteria,” it states here on its website.

There is no "cure" for coronavirus as of April 2021, according to the WHO.

Vaccines are being administered to millions of people around the world in a bid to protect them from the disease, AFP reported here.

The Italian health ministry explained here that paracetamol “provides pain relief, which is very useful in case of high fever, but it does not cure coronavirus".

The WHO has also clarified that Covid-19 spreads through droplets when people cough, sneeze, talk or touch a contaminated surface -- not through 5G technology.

"COVID-19 is spreading in many countries that do not have 5G mobile networks,” it says.

Conspiracy theories blaming 5G technology for the spread of Covid-19 have circulated widely since the early months of the pandemic.

Fabien Heliot, a researcher who specialises in electromagnetic exposure in wireless communication at the University of Surrey, told AFP that 5G technology cannot create a virus.

"5G, like previous generations of cellular communication systems, is a RF-based (radiofrequency) technology that uses electromagnetic (EM) waveform to transmit information; EM-waveforms are themselves non-ionizing radiations,” he said in April 2020.

"Being a living thing, a virus cannot be created by radiation. Actually, it is the other way round — there are guidelines put in place to ensure that radiation does not harm living things.”