A Facebook post published in August 2019 claims data compiled by the Australian Bureau of Statistics (ABS) shows 1,219,000 people are unemployed; 243,200 jobs are vacant; and 1,371,000 people are underemployed in the country. The post has been shared hundreds of times. The claim is misleading; the "unemployed' and "underemployed" figures were compiled by market research company Roy Morgan in January 2018; the "vacant jobs" figure was published by the ABS in May 2019.

This Facebook post, published on a page called ‘The lunatics have taken over the asylum’ on August 6, 2019, features a photo of Australian senator Michaelia Cash alongside the misleading statistics. It has been shared more than 800 times. 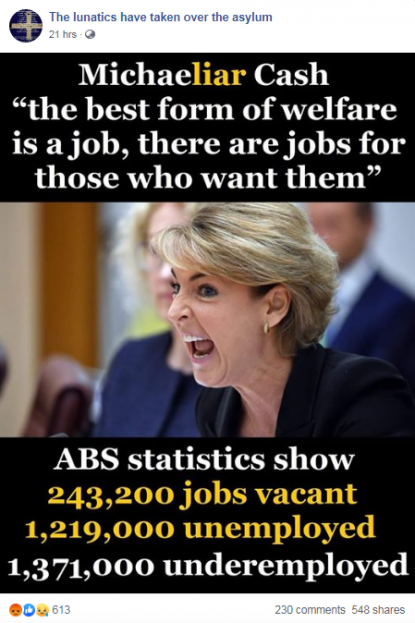 The text superimposed on the photo states: “Michaeliar Cash "the best form of welfare is a job, there are jobs for those who want them"

The claim in the post is misleading. The figures for unemployed and underemployed Australians were published on Roy Morgan’s website here for January 2018. The figure for "unemployed" is given as 1,219,000 and "underemployed" is given as 1,371,000 for the same month. Below are two screenshots from the page, which AFP has placed next to each other; 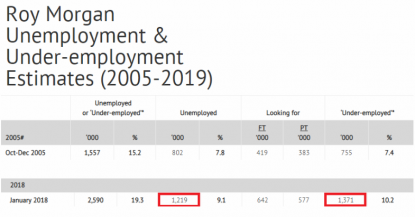 But the most recent ABS’ employment summary for Australia shows its seasonally-adjusted unemployment figure for June this year is 711,500.

Seasonal adjustment is a statistical technique that aims to smooth out predictable swings in data to make the numbers clearer.

Below is a screenshot from the ABS page, with the number of unemployed outlined in red: 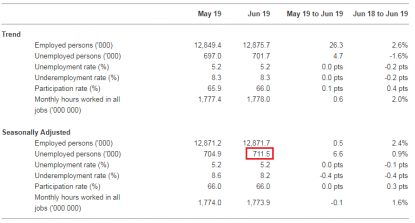 Unemployment statistics differ between Roy Morgan and ABS because of the definitions they use to determine who falls into each category.

Roy Morgan defines an unemployed person for example as someone “looking for work no matter when”, while the ABS definition here is narrower.

The seasonally-adjusted figure of underemployed people given by ABS for June 2019 is 1,112,300, according to the ‘Underutilised persons by Age and Sex - Trend, Seasonally adjusted and Original’ spreadsheet available here. That’s lower than the 1,371,000 given by Roy Morgan and claimed in the misleading post.

Below is a screenshot of the spreadsheet, with the June 2019 figure indicated in red: 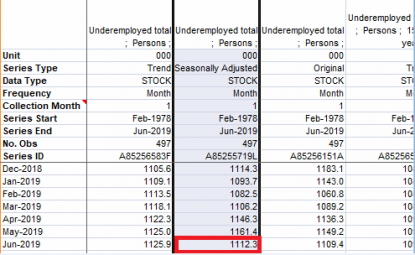 The misleading post also claims the ABS says there are 243,200 “jobs vacant”. The Bureau did give this number -- but for May this year, as the screenshot from its page below shows: