Two videos of large flocks of sheep have been viewed tens of thousands of times in multiple posts on Facebook, Twitter and YouTube in late February 2020 alongside a claim they show 30,000 sheep that Mongolia donated to China during the novel coronavirus epidemic. The claim is misleading; both videos circulated online before Mongolia announced the donation on February 27, 2020. On February 28, 2020, Chinese officials said the two countries were still in the process of discussing logistics of the donation.

The videos were published on Facebook here and here on February 29, 2020.

The first post’s caption, written in simplified Chinese, translates to English as: “The 30,000 sheep donated by Mongolia to China have entered via the Erenhot port, what a spectacular scene. Just yesterday some people were worried about the means to transport such a large number of sheep. It turns out that no transport is needed, the sheep simply walked over the border".

The second post, which has been viewed more than 530 times, has a traditional Chinese caption that translates to English as: “The 30000 sheep donated by Mongolia to China have crossed the border in high spirits".

Below is a screenshot of the first (L) and second (R) misleading Facebook posts:

Both videos were shown together on Facebook here and on YouTube here, here, and here with a similar claim.

During a visit to Beijing on February 27, 2020, Mongolian President Khaltmaa Battulga pledged that the Mongolian people would donate 30,000 sheep to China as a gesture of goodwill, as China continued to fight the novel coronavirus epidemic that had killed more than 4,000 people and infected over 110,000 others worldwide as of March 10, AFP reported here.

The “contributions will be measured in the depth of its significance in bilateral ties,” Battulga said while announcing the commitment, according to an official government statement published on February 27.

Reports of Mongolian people pledging varying numbers of sheep to the donation have been reported by Mongolian and international media here, here, here and here.

However, the claim that the two videos show the donated sheep travelling to China is misleading.

The Chinese Communist Party’s Central Political and Legal Affairs Commission in Inner Mongolia, a northern Chinese autonomous region bordering Mongolia, refuted the claim as “fake”, noting on Weibo that the sheep transfer had not yet begun at the time the misleading posts were published.

"The 30,000 sheep you saw claiming to be gifted by Mongolia are fake,” the commission wrote on Weibo on February 28, 2020. “According to the Cyberspace Administration of China in Erenhot, Inner Mongolia, it has been verified that relevant departments in China and Mongolia are still negotiating specific details, such as how to bring the 30,000 sheep from Mongolia to China. Therefore, online videos that claimed to show the 30,000 sheep donated by Mongolia to China being herded to the port of Erenhot are fake. Do not believe in rumours, do not spread rumours, the priority is to obey the law!"

Both videos in the misleading posts were included in the commission’s Weibo post with the Chinese characters for “fake” superimposed on them. 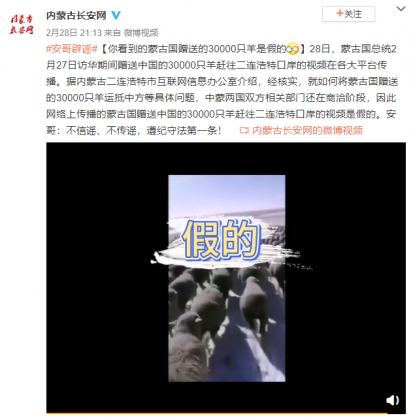 Reverse image searches on Google found both videos circulating online before Mongolia made the donation pledge.

The first video was published on December 9, 2019, here on VK, a Russian social media network. The video corresponds with the VK clip from the four-second to 19-second mark.

Below are two sets of screenshot comparison of the first footage in the misleading posts (L) and the VK video (R): The second video was published on February 17, 2020, by a Chinese company here on Douyin, the Chinese version of video-sharing app TikTok.

Below are another two sets of screenshot comparison of the second footage in the misleading posts (L) and the Douyin video (R): 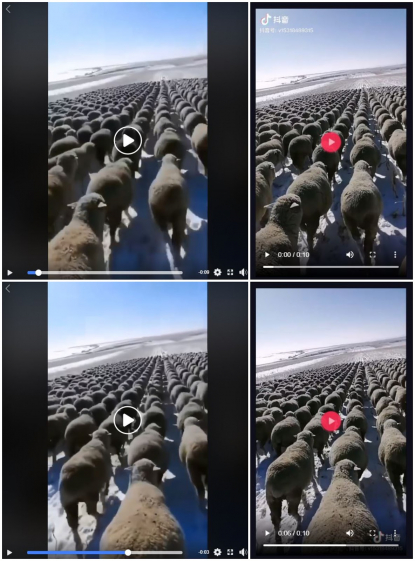 The uploader of the Douyin video, Chinese company Yuncheng Shengfeng, told AFP the footage is unrelated to the Mongolian donation.

“I saw those videos in a customer’s WeChat account a few weeks ago, thought they were fun, so I saved them and posted them on our Douyin account, which I’m in charge of,” a company spokesperson said during a phone interview with AFP on March 4, 2020. “I’m pretty sure I saw it weeks before the news about the Mongolian donation. I've also noticed the videos have been misused widely online, so I try to clarify whenever I come across a misleading claim."